Skip to main content
Rhetorical Legacies
English
By Robert Nichols
Brooke Rollins uses Jacques Derrida's writings to explore classical rhetorical texts.
Jacques Derrida was the founder of “deconstruction,” a way of challenging not only both literary and philosophical texts, but also political institutions. Brooke Rollins uses Derrida’s critical theory to create a bridge to the past. She uses the French philosopher’s writings to 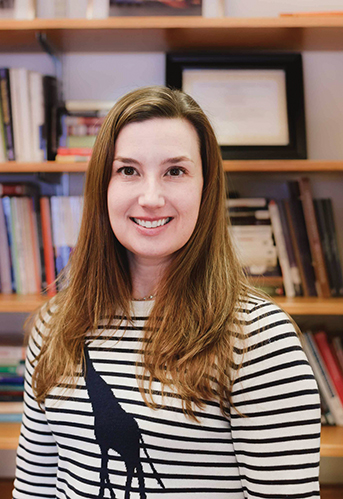 re-imagine classical rhetorical texts and contexts, and she is particularly interested in uncovering the long-overlooked ethical dimensions of persuasion.
The author of the upcoming book The Ethics of Persuasion: Derrida’s Rhetorical Legacies, Rollins makes an updated claim for Derrida as an important thinker of rhetoric, and she uses his work to argue for the ethical priority of a discipline that’s been characterized as bereft of ethics.
“It’s a postmodern rethinking of a classical discipline,” says Rollins, assistant professor of English.
Rollins uses Derrida’s work to demonstrate the ethics of classical rhetorical texts and figures famous for their persuasive power. “Rhetoric is not merely a discourse of utility,” she says. “While persuasion is involved in the guileful production of linguistic rule, it actually challenges the sovereignty of the speaker who would seem to be running the rhetorical show.”
Rereading the texts of Greek rhetoricians including Plato, Isocrates, Gorgias and Aristotle alongside the poststructuralist theory of Derrida, Rollins developed the classical rhetorical tenet of “otherness.” In one chapter, for example, she took up the ancient tradition of ghostwriting. “Lysias was the ancient world’s most famous ghostwriter,” Rollins says. “He was known as a rhetorical gun for hire who would write a legal defense speech for anyone who could pay him.”
She explains that all but one of Lysias’ extant speeches were written in the voices of his many criminal clients. But by analyzing Lysias’ speeches, as well as the various histories and fictions others have told about him, she shows that persuasion involves an encounter with otherness. “The ghostwriter is other not just insofar as he writes in other voices. He is other from the start, hovering at the boundaries of presence and absence.”
Rollins argues that radical otherness is a central tenet of the rhetorical tradition. “In persuasion, otherness always comes first. This is the ethics of persuasion.”
Research
& Creative Briefs
Spring 2015
- Collapse