Though known for her quiet, soft-spoken demeanor, Hnin Su Mon ’16G has a passion for public health and human rights. As a Fulbright scholar, Hnin Su came to Lehigh to pursue her master’s degree in sociology, and she hopes her research will make the difference of a lifetime for persons living in her home country of Myanmar. 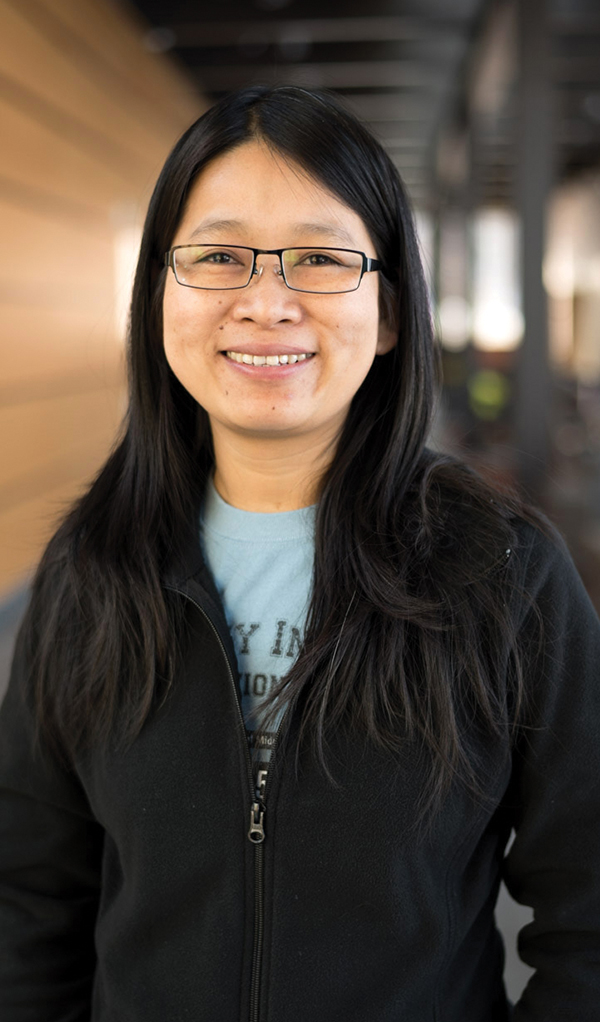 Although Hnin Su has always been enthusiastic about social policy and human rights, she has taken an indirect route to the field of sociology. She began her career at a hospital, working as a private nurse and went on to be a communication officer.

“As a private nurse, I had to take care of one patient for 12 hours a day,” she recalls. “But I learned a lot during my undergraduate education and thought I could do more for a greater number of people, rather than spending most of my time with one patient. So I took a six-month English language course, and learned about human rights. At the time, I was 23, and that was the first time I heard about the Universal Declaration of Human Rights.”

Hnin Su took those classes at the American Center in Yangon, and the experience inspired her to become involved in health issues on a global level. She has worked for various international NGOs and United Nations-affiliated organizations on child protection issues and HIV and drug counseling services for marginalized groups. Hnin Su began working for Médecins du Monde (Doctors of the World), providing prevention counseling for persons with a heightened risk of contracting HIV. She found the work professionally fulfilling.

“I counseled sex workers, gay men and drug users and their spouses and family members,” she says. “And I was happy, every day of my life. I was making a difference. After one year, I received a promotion.”

Her promotion to behavior change communication officer within the same organization enhanced Hnin Su's ability to design, implement and evaluate the effectiveness of interventions for specific populations—skills she will use in researching and writing her thesis. This new position also propelled her into the world of nongovernmental organizations and social policy, setting her on the path that would lead her to Bethlehem’s Southside. Five years after beginning her career with Médecins du Monde, and finishing both intermediate and advanced English courses, Hnin Su obtained a position with the United Nations, first as a communication associate with the Three Diseases Fund, which is dedicated to reducing the morbidity and mortality rates for HIV, AIDS, tuberculosis and malaria in Myanmar and next as a communication officer for the United Nations’ Children’s Fund. The work undertaken by colleagues at UNICEF and various NGOs has changed Hnin Su’s life.

“At the UN, we worked together with the Department of Social Welfare on a new campaign to prevent (unnecessary) family separation,” she says. “My senior colleagues at the UN and the NGOs were Fulbrighters, and I learned a lot from them. There were different scholarship opportunities—in Australia or New Zealand, for example. But, since I had taken English classes at the American Center, for me it was the U.S. or nothing!” During the application process for the Fulbright, Hnin Su was certain that Lehigh was her top choice. Lehigh was proposed by the Institute for International Education, an organization the works closely with Fulbright. A variety of factors, including a diverse array of sociology courses, the beautiful campus and cost-sharing with the Fulbright program, guaranteed her decision.

Transitioning from a full-time career in Myanmar to graduate school in the United States wasn’t as difficult as Hnin Su thought it would be. A monthlong pre-academy orientation at the Middlebury Institute of International Studies, sponsored by the Fulbright program and held in Monterey, Calif., prepared her for what to expect regarding language requirements of U.S. graduate programs, study habits, managing stress and homesickness and adjusting to culture shock. And at Lehigh, a warm welcome made her feel right at home.

“Dr. Bill Hunter was the first person I met at Lehigh,” she remembers of Lehigh’s director of international outreach. “He met me at the airport with a sign that said ‘welcome home.’ At first, I was worried. I thought, ‘I’m 31, I’m older, so maybe I won’t make any friends.’ But I have! It’s been amazing here.”

Other advantages Hnin Su has discovered are that the courses in which she is enrolled, and the variety offered by the sociology department, are invigorating and cater to her broad array of interests.

“I want to learn about gender and sexuality,” she says. “At the same time, I want to learn about political sociology and race and ethnic issues. This program has all of these. My thesis is about the ongoing ethnic and religious conflict in my country. It’s difficult to describe, and there are so many factors complicating this issue. The class I am taking this semester on comparative religion and politics will help me explain it.”

And, while Hnin Su is in the United States, she receives ongoing support from fellow Fulbright scholars she met in Monterey, as well as newfound friends at Lehigh who helped her understand aspects of American culture, such as football and how to survive cold weather. In February 2015, she reconnected with fellow Fulbrighters at an enrichment seminar, where she attended sessions on civic engagement and advocating for civil rights—two themes that will feature prominently in her thesis.

“After graduation, I plan to return to Myanmar and share what I’ve learned,” she reveals. “As a student from a developing country, it’s impossible to earn this kind of degree by myself (without a Fulbright). I feel like I have a responsibility—not only to my country, but also to humanity—to contribute in building a better world.”