Living close to New York City and its international art scene in the 1960s, Lehigh benefactors Dr. Richard and Alice Thall began purchasing affordable works of fine art early in their marriage. Their interests ranged from lithographs by Stuart Davis to engraved prints by John Sloan, George Bellows and Whistler. Switching mediums when the artists’ work became “out of our price range,” they began collecting photography by artists Aaron Siskind, Richard Misrach and Ansel Adams before most of mainstream America began considering this mode of creative expression as a form of art. After five decades of following rising artists, the Thalls say their notable collection has surpassed their imagination as to what it has become today. 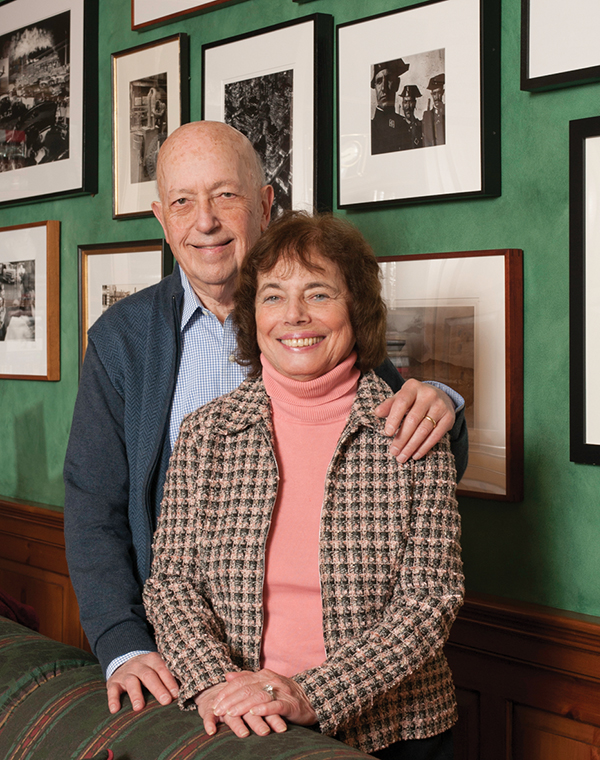 “It was luck and love,” said Alice. “You buy it because you like it, not because of what you think it will be worth in the future.”

Their collection and knowledge of art are impressive. As a board member of Brattleboro Museum and Art Center in Vermont, Dick attributes his early interest to the liberal arts while majoring in the pre-med/pre-dental program at Lehigh. In fact, he considers his undergraduate experience, which included being president of Pi Lambda Phi and a member of the Interfraternity Council, “a great growing process.”

“During those three years at Lehigh, I took as many liberal arts courses as I could fit in. I wanted to become a person that had varied interests. One of the first courses I took was History of Art. That opened my eyes to the world of art and, through that, ancient history,” said Dick, who appreciated that education even more when he fulfilled his two-year Lehigh ROTC military commitment after earning his dental degree. The Air Force stationed him in Athens, Greece, where he was the base dentist. “It was very exciting to actually see all of the places that I studied about while at Lehigh, like the Acropolis and Olympia, the place of origin of the Olympic Games.”

Always knowing that he and Alice would want to give back to Lehigh to provide others with the same opportunity, they established a student scholarship fund in their names in 1984. While so far helping 11 men and women obtain a Lehigh education, the Thalls thought of another way to add to the student experience. When the Lehigh University Art Galleries (LUAG)/Museum Operations opened two new galleries in 1997 as part of the Zoellner Arts Center, they thought of their personal art collection.

“When I was at Lehigh, there was no place to hang art or hear a concert. The concert series was in Grace Hall, which was a combination of a wrestling arena and auditorium, said Dick, a retired orthodontist. “The Zoellner Arts Center opened up the ability to be able to give back to Lehigh something that Alice and I had. I wanted to give back to the school that I felt was responsible for a great deal of my life with art.”

From their first donation in 2004 to this past fall, the Thalls have provided 63 Siskind and four Misrach limited-edition photography prints to Lehigh’s teaching collection.

A collaborative relationship bloomed between the Thalls and Ricardo Viera, professor of art and director/chief curator of Lehigh University Art Galleries/Museum Operations, who met in Zoellner after the venue’s inaugural gala performance of the New York Philharmonic. Learning of their mutual admiration for Siskind and that Viera was planning a major Lehigh art exhibition to celebrate the artist’s work, Dick was instrumental in helping the exhibit become reality. He connected Viera with the Robert Mann Gallery in New York City, which loaned many of the prints from its collection to Lehigh for the 2003 exhibit. The following year, the Thalls made their first gift of 18 Siskind photographs to LUAG and then followed with very famous works by Misrach.

“Dick Thall loved the idea that we were building the art collection at Lehigh,” said Viera, who, in the 40 years he has been at the university, has expanded the collection from 2,500 pieces to almost 13,000 with close to 6,000 being works of photography. “I think that was one of the reasons that he made a point to help us. He and Alice were truly gracious. Today, we have a beautiful, important body of Siskind work of our own.”

Siskind is considered America’s most influential abstract photographer. His early work in the 1930s and 1940s focused on documentary photography in Harlem, then transitioned to organic images such as rocks, seaweed, trees and lava and finally evolved into abstraction.

“He was kind of revolutionary in the ’60s when he went to Mexico and South America. He was photographing graffiti…walls. He was becoming extremely well known as an abstract photographer,” said Viera, who met and heard Siskind lecture as a graduate student at the Rhode Island School of Design. Viera includes the artist as a key element in the Photography as Contemporary Art course that he teaches. Using works from the teaching collection, he explores the power of photographs as a dominant 21st-century visual art form. The collection includes the first 13 Siskind prints donated by Simon Levin ’64 in 1984.

“Now, with this latest gift of 45 works from the Thalls, we have the amount of Siskind prints we need to see the evolution of how he actually composed. How he dealt with dynamic symmetry and depth of field. How he worked with light. There are many aspects that can be studied,” said Viera. “Siskind has a generation of followers.”

As an academic art museum, the teaching collection offers students from all disciplines direct experiential learning to explore diverse topics in visual literacy and the humanities.

“Students are learning to be curators and care for art…how to store it, handle it and mat it properly,” said Dick. “We are happy to be able to give this art to the students to learn about this important artist—and photography in general.”

Viera stated that the entire Lehigh collection has been developed from gifts by alumni, parents, friends and artists. “Almost everything comes from others’ generosity,” he said.

Enhancing the student experience with their collection is very important to Dick and Alice, who are members of the Asa Packer Society and the Tower Society, Lehigh’s leadership giving societies.

Dick attended Lehigh because of the well-rounded education he would receive. In 1954, he was able to leave his undergraduate alma mater a year early to attend New York University and earn his dental degree. He eventually earned his graduate orthodontic degree at NYU.

Dick and Alice’s daughter, Diana, majored in psychology at Lehigh, and her husband, Craig Levin, majored in finance. They are 1987 graduates. Both of their children chose Lehigh because of the different disciplines they could pursue and the possibility of doing research. Jennifer ’15 is majoring in psychology and has a double minor in business and health, medicine and society. Matthew ’18 is currently undeclared in the College of Business and Economics but is interested in minoring in creative writing or international relations. Dick lauds Lehigh’s interdisciplinary approach to education and knows how it personally impacted him.

“Lehigh was a very important marker in my life to put me into a position to be a different person from when I arrived,” he said.

Reflecting on the Thall-Lehigh family legacy, Alice said, “Lehigh has just been a total win-win for all of our family.”