Skip to main content
Features
A Journey from the East
Lehigh builds a theatrical Chinese bridge between Bethlehem and New York City
By Geoff Gehman ’89 M.A.
A man exercises near the Sands casino.

Dong-Ning Wang ’98G approached the middle-aged Chinese man outside the Sands Casino Resort on Bethlehem’s Southside, where busloads of Asians arrive daily to escape New York City. The Lehigh teacher asked him in Chinese why he was there, sitting on the curb without shoes or socks. He told her he was relaxing in “the countryside,” basking in the sun 80 miles and a world away from Chinatown to improve his poor health and bad fortune. 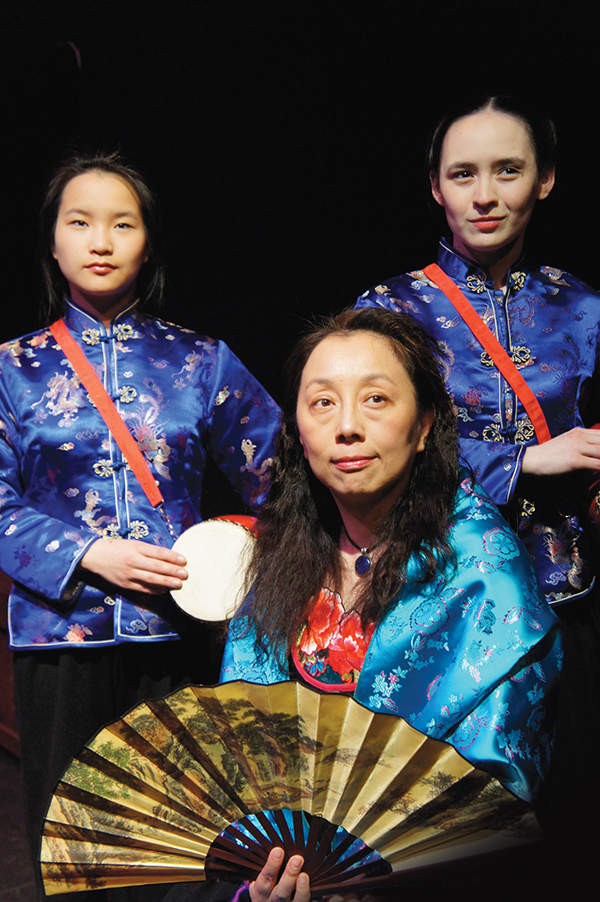 Part of a team of Lehigh faculty and students, she was collecting stories for a two-part play about integrating Chinese and American societies and produced by Touchstone Theatre, the South Bethlehem company devoted to communal experiments. The first part, “Journey: Dream of the Red Pavilion,” was staged last year and featured four women acting out their Asian-American experiences. One of the performers was  Wang, a Beijing native and adjunct lecturer in the department of modern languages and literatures. Wang will also appear in the second play, “Journey from the East,” an adaptation of “Journey to the West,” an immensely popular 16th-century Chinese novel about a monk’s mission to obtain saving scriptures from the Buddha. The production will unfold April 18-19 and 25-26 on the South Bethlehem Greenway, where Wang and her student collaborators interviewed Chinese New Yorkers who were taking gambling breaks. It will begin and end at the Chinese-Heting Harmony Pavilion, which she helped develop with colleagues Norman Girardot, professor of religion studies; Constance Cook, professor of Chinese in the department of modern languages and literatures; and Marcus Brandt, craft master.

Wang has been building bridges since she came to Lehigh nearly 20 years ago as a doctoral candidate in material science. She was the ideal guide for Touchstone ensemble associate Mary Wright, the writer/director of “Journey: Dream of the Red Pavilion.” She introduced Wright to Chinese-speaking students, merchants and worshippers, all of whom agreed to be interviewed because they trusted Wang.

“Dong-Ning opened up so many avenues,” says Wright. “She was our connector.”

Inspired by Wright, Wang launched Storytelling and Collecting, a course focusing on the Touchstone project. Wang and her students interviewed a wide range of Chinese visitors to the Bethlehem casino. Over the course of four semesters spanning 2013-14, students conducted interviews and collected several important Chinese alumni’s stories from Lehigh’s archive while working with the theatre to develop the two productions. Students came away with realworld experiences. Michael Rong ’15, a computer science/engineering student, met an elderly lady who came not to gamble but to sell her free gambling card for $40, $5 under its value. Architecture major Shannon Chen ’13 learned that Asian “transients” have turned Bethlehem into a playground for playing cards and practicing tai chi. The casino area is so popular, she points out, there is a two-week wait for bus tickets. Corina Fitzgerald ’17 traced another kind of gambling while conducting interviews. The tourists told the Asian Studies major that many of their peers apply to American colleges and universities to avoid taking China’s extremely difficult entrance exam, an experience made more fiendish by the release of their scores after they’ve applied to Chinese schools.

Wang notes that the students enjoyed the assignment and came away with personal parallels and new perspectives on the tourists. Fitzgerald thanks Wang for expanding a Far Eastern quest she began as a middle schooler in Maine, where the lack of ethnic diversity made her want to embrace ethnic diversity.

“Dong-Ning is a great resource and a great person,” says Fitzgerald. “Her encouragement is just amazing; she made me, the only non-Chinese student in her class, feel completely comfortable. She makes everyone feel at home.”

Empowered by stories gathered by Wang and her team, Wright changed “Journey: Dream of the Red Pavilion” from a tale about natives changed by non-natives to a more universal, personal tale about emotional migration. She weaved in Wang’s belief in the Chinese conviction that everyone and everything is tied by a thread of invisible red silk.

“People share more in common than differences,” says Wang. “The world would be a better place if we tried to understand each other instead of guessed.”