On July 16, Danielle Taitt embarked on her first journey to Africa to examine the effects of urban design on culture and social structure in Ghana. She focused on two cities, Accra and Tema, to determine if the physical structure of a city can impact the social interactions between residents. 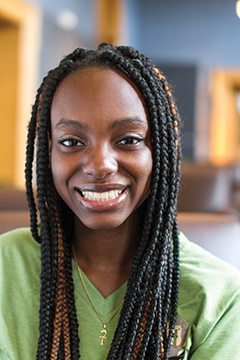 Urban planning has become a focus of the Ghanaian government in recent years, as they struggle to deal with growing numbers of informal-settlement dwellers living in urban centers. Accra is growing at a staggering rate; according to current trends, the city’s population of 4 million will double in five years, making urban management a clear and inevitable priority. Over the past several years, they have attempted to provide a comprehensive framework for urban development. Previously, planning in Ghana was focused on rural areas, where 80 percent of the population once lived. Now, more than 51 percent of Ghana’s population lives in urban areas.

Taitt, a senior with dual majors in science, technology, and society and economics, was awarded a Dale S. Strohl grant to conduct urban planning field research as part of her senior thesis. She envisions her investigation will be a capstone to her experience at Lehigh.

“More students should take advantage of the Strohl grant because it’s amazing to be awarded ‘x’ amount of money to do research your area of interest,” she says.

Conducting field research successfully required experience, and the New York City native credits a three-year course she took in high school with helping provide her with a background writing abstracts and developing surveys. Supported by the Strohl award, she spent three weeks living in a hostel just outside Accra and traveled throughout the city conducting interviews with neighborhood residents, business owners and government officials to determine whether there are correlations between urban design and aspects of the Ghanaian social fabric, such as public health, education, and labor. Taitt used her data and compare it to previously published data collected in surrounding rural areas to ascertain local perceptions of life in an urban area.

Taitt says she was particularly interested to learn about the local people and their cultures, and how residents would accept her presence while conducting research.

“So many researchers go to Africa and it was an interesting experience to see how people received me when I attempted to interview them, if they did at all, and what hurdles I encountered to get them to talk to me,” she says. Taitt’s interest in Africa has been steeping for years, and the opportunity to study this issue arrived in the fall of 2014 when she enrolled in a class, “Global Africa: Aid, Volunteerism, NGO’s and International Studies,” taught by Kwame Essien, assistant professor of history and Africana studies. The course explored various volunteer activities, the role of NGOs, missionaries, philanthropists, medical practitioners, and global education in Africa. Taitt spoke with Essien about her future career goals and he suggested the idea of applying for the Strohl grant with the topic of urban planning. While in Africa, Essien mentored Taitt, made arrangements for her to meet various officials at the Town and Planning Office in Accra, as well as other government officials. Taitt notes that her interest in urban planning creates bridges between public health interests and her dedication to the well being of a community in general.

In addition to her dual majors, Taitt is completing a health, medicine, and society minor. Outside her academic pursuits, Taitt is an active member of the Lehigh community. She is a Gryphon for the UMOJA house, and chartered a new sorority on campus, Sigma Gamma Rho, the first national Pan-Hellenic council sorority to charter a chapter at Lehigh. In part because of the experiences garnered through the Strohl award, Taitt says she will continue to pursue her interests in urban planning after graduating from Lehigh.

“I wanted something to solidify the end of my academic career here at Lehigh, especially since Lehigh doesn’t have an urban planning program and I want to go on for a master’s degree in this field,” she says. “The Strohl grant provided really a good opportunity to take advantage of the funds available for undergraduate research and turn it into something that both piqued my personal interest and combined it with something that helped strengthen my academic foundation. I am grateful for this award. I see this research as a work in progress and look forward to continuing my research in Ghana in the future.”