Nandini Deo has spent the past 10 years studying social movements in her native country of India. She started with the women’s movement for equal status. “If I hadn’t become a political scientist, I think I would have become a full time activist in the women’s movement. It makes sense to me,” says Deo, who has been at Lehigh for the past seven years.

This winter, Deo plans to publish “Mobilizing Religion and Gender in India,” a book that explores the effectiveness of feminism as a social movement with roots that stretch at least to the beginning of the 20th century. 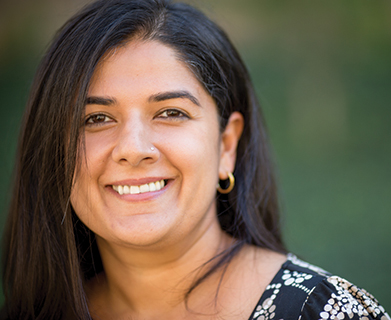 Her overall goal was to understand what makes social movements work. “How do a group of activists with an ideological commitment translate their deeply held ideas into something that others also come to support? That’s the big question I’m asking,” she says.

Her examination of feminism in India began with trying to understand how activists influence policy. “But they’re actually not very successful in doing that. The question is, why? I wondered if there was more the women's movement could be doing. I thought it was useful to have a comparative case,” she says.

Deo, associate professor of political science, chose to study the Hindu Nationalist political movement alongside the women’s movement during the same 20th century time period. The political movement also had a defining set of ideals. “I tried to identify times when both movements were very successful and times when they were less successful. Then I tried to connect those particular instances to strategies that activists were using,” she says.

While examining the women’s movement, Deo found that it stagnated at times when there was very little coordination among the various groups involved. They did not have a coherent lobbying voice to lead them. The Hindu Nationalists, on the other hand, had a more organized method that led to successful action.

Besides having to contend with opposition from the status quo, social movements are pulled in different directions by a myriad of external influences, including economic, political and social. Deo parsed through the complex factors surrounding the evolution of both the Hindu Nationalist and the feminist movements.

She concluded that a social movement’s fluctuations between success and failure don’t depend on its ideology. Instead, a movement’s ability to effect change through the decades depends on how well its members seize opportunities to build trust and mobilize support from the grassroots.

When she was interviewing activists in the women’s movement, Deo was surprised to encounter only one instance of someone asking her to help the cause by inviting her to join a protest or raise some money.

“There was no attempt to pull me in. Yet, when I researched the Hindu Nationalists, almost every time I interviewed someone, they asked me to help,” she says. Since Deo disagreed with their goals, she didn’t participate. “It was striking to me that there was this difference. It speaks to one of the really important differences between the two movements. The feminist movement has become professionalized to a large extent, so it’s not as savvy about how to recruit new activists,” she says.

Next ›
The Psychology Behind Mine Safety