The Winter’s Tale, Shakespeare’s tale of a royal family separated by tragedy, then reunited, was performed July 29 – August 2 by Philadelphia’s Shakespeare in Clark Park (SCP). Scene design for the outdoor production offered challenges and an exciting design opportunity for Melpomene Katakalos. 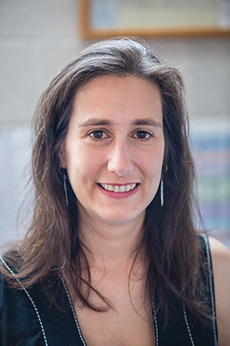 In The Winter’s Tale, Leontes and Polixenes are the best of friends, until a jealous madness tears their families apart. Katakalo, assistant professor of theatre, worked with director Kittson O'Neill, puppeteer Aaron Cromie and artist Christina May to stage a celebration of life, love and the power of family.

“The fun thing about the project is that it is in the park, so it’s outside, it’s interactive,” says Katakalos. “It’s a found space and you have to accommodate for that, so although the scenery is minimal, it’s important in terms of creating the environment.”

Shakespeare in Clark Park is committed to presenting free, outdoor productions of Shakespeare’s plays, creating a cultural event accessible to the public. More than 1,000 people often attend with their picnics for performances under the stars. Katakalos’ relationship with O’Neill developed from a previous collaboration at Philadelphia’s InterAct Theatre. O’Neill, the dramaturg and artistic associate at InterAct, asked Katakalos to be part of the production.

In developing the scenery, Katakalos knew the set had to adapt to the environment. Her design uses large swaths of fabric that the actors manipulate with their bodies or poles to create and change the environment. The scenery becomes part of the action and helps tell the tale, she says.

As part of her design process, Katakalos is often involved early in the production process. Her research explores the development of new work and/or devised work in which she serves as a generative artist working collaboratively with the writer and director.

“I’m in the room early, and that’s not always typical,” she says. “I talk to the director about what I see, what I think and that can change how the play is staged. I see how the design fits in better and how the language I use and the things I see parse out what is useful. It’s visceral. It’s about total environment. When I have input or an observation, it’s this other layer that doesn’t exist if I’m not there.”

Her process-oriented approach to design is also influencing an upcoming project with director Mei Ann Teo on Shape of a Bird, an adaptation of Antigone by Jean Tay, a celebrated Singaporan playwright, to be staged at the Singapore Fringe festival 13 – 24 January 2016. Singapore Fringe Festival is an annual festival of theatre, dance, music, visual arts and mixed media created and presented by Singaporeans and international artists. Katakalos has a strong artistic relationship with Teo. She was scene designer for Teo’s 2014 production of Wake in New York City and co-devisor of 2015’s Labyrinth: Defining Humanity in China.

The work she does professionally seeps into the classroom, influencing the work of her students, Katakalos notes.

“With this process-oriented approach, the process is just as important as the result. As a teacher, it’s made me even more aware of the process and exposing students to this idea of process as the value. That’s where the value of the learning is happening."