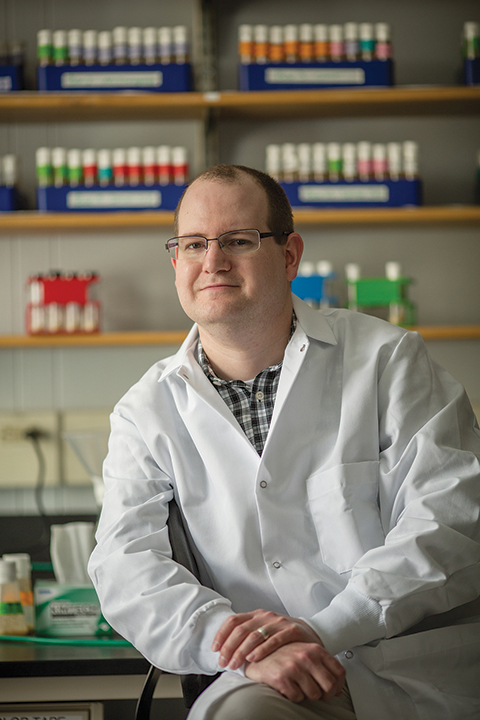 Babcock, assistant professor of biological sciences, studies these protein aggregates within dopaminergic neurons. Dopaminergic neurons of the midbrain are the main source of dopamine in the mammalian central nervous system, and they play an important role in the control of multiple brain functions. Fruit flies also have dopaminergic neurons in their brains so they have similar types of neurons. When scientists manipulate these neurons, they find the flies exhibit similar motor symptoms to humans, such as difficulty walking and climbing. The more in common it has with the human disease, the better the model.

Drosophila make good models because they develop from embryos to adults in 10 days and they can live a few months. Also, a single female can lay hundreds of eggs. Researchers can quickly screen through thousands of flies. Despite having a much shorter lifespan, flies exhibit many of the physical challenges encountered by humans as they age. By expressing fluorescently tagged “toxic” proteins in small subsets of neurons in the Drosophila brain, Babcock can monitor the extent of aggregate spreading and identify the key regulators required for this spreading to occur. Over a span of 30 days, Babcock’s lab can express different proteins that are prone to forming protein aggregates and observe the resulting processes.

“Using flies means we don’t have to wait for years to observe things. We can observe what is happening in less than a month, which is incredible.

“In the case of Parkinson’s, we can take the human form of that toxic protein and turn it on in the fly’s neurons,” says Babcock. “We find that it does many of the same things in the fly’s neurons. If you turn these things on all over the brain and look under a microscope, it’s almost impossible to see clearly because it’s everywhere, but if you can target a really small subset of neurons, you can see all these fine processes. You can see these neurons degenerating, see where the proteins are going, what’s actually happening to the neurons.”

Scientists recently determined that long before neurons start to die, changes occur at the terminal ends of the cell. Part of Babcock’s research also involves examining how synapses degenerate and how this relates to neuronal loss in Parkinson’s disease.

“The hypothesis we’re testing is that what’s taking place at the tips of the neurons is setting off a cascade of events, ultimately causing death of the neuron. If we can understand what takes place much earlier, can we intervene at that point? Can we fix it and stop the neurons from dying?”