The coolest thing about bacteria, according to Julia Nelson ’18, is their multitude of little quirks. Certain bacteria have even evolved to switch on an enzyme that modifies their cell walls in order to fight their traditional nemesis, penicillin. These so-called superbugs can resist drugs like penicillin and render antibiotics useless in fighting infections.

Nelson works to fight bugs like these each week in the lab of Marcos Pires, assistant professor of chemistry. For eight hours every week, she steps out of the closed worlds of her undergraduate labs and joins three other undergraduate researchers and two graduate students in his lab, where she has been helping to chip away at the puzzle since the spring of her freshman year. The lab is unique in its style of attack: The team is looking for a way to use immunotherapies to prompt patients’ own defense systems and sidestep drugs altogether. 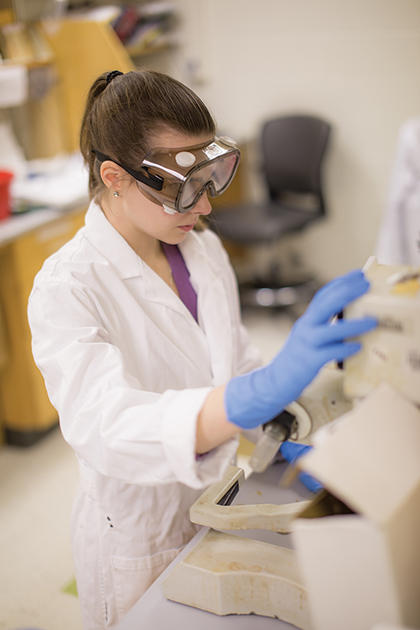 Nelson joined the project in the spring of her freshman year, when David Vicic, chemistry professor and department chair, alerted her to an opening in the lab.

“This was a topic I found really interesting, so I couldn’t help but jump at the opportunity. I didn’t want to pass it by.” In her own time, Nelson has taken on three distinct majors. Now a junior, she will graduate next year with degrees in molecular biology, pharmaceutical chemistry and mathematics.

While she currently receives academic credit for her work in the lab, she won a grant to carry out the research last summer.

“The summer work is generally more productive because it’s not as interrupted as during the school year,” she said. “You can accomplish things a lot more quickly.”

“Once that (drug-resistant) strain appears, it will spread rapidly because there is nothing that can kill it,” said Nelson.

What started as an isolated threat can become an epidemic unless scientists can come up with another means of fighting it. By 2050, according to a report on antimicrobial resistance, the issue could eclipse cancer as a leading cause of death worldwide. If no drug can touch it, Nelson’s lab is betting that our bodies can be taught to fight the battle for themselves, a sort of martial arts on the molecular level. The lab is trying to guide the immune system into a coordinated attack by manipulating the bacteria’s own makeup and implanting an antigen, or marker, to allow the system to detect the bacteria more easily.

“Our method would just target the cell wall, which has been relatively constant in bacteria for a very long time,” Nelson said.

The other advantage to this method is speed: “The immune system will recognize the bacteria more quickly (than a drug would) and get to the site of infection more quickly—and kill them in that way.”

Nelson now builds peptides, proteins that bacteria use to construct their cell walls. The idea will be to imbed a special molecule into the peptides, a signal that human immune systems would pick up on and hopefully stimulate an attack. For now, Nelson imbeds a marker into the peptides to see if the plan will work.

“I do a lot of synthesis to build these molecules,” Nelson said.

Because the immune system and its components are so complex, a working therapy for drug-resistant bacteria may be a long way off. In the meantime, Pires’ lab focuses on incremental progress, like  successfully embedding marker probes into proteins.

“We are more focused on celebrating the little victories,” Nelson said.

After two years in the lab, actual patient interaction sounds appealing to Nelson—she is considering medical school after graduation.

“Right now,” she said, “I think I would prefer to be a practicing physician and am also considering pursuing work in clinical trials.”

Until then, she appreciates her time in the lab.

“It’s fun because I have learned about some of this in my classes, and now I am actually doing research about it and really understanding it.”