Skip to main content
Features
The Unlikely Case of the Physicist and the Disappearing Photographs
Nick Bigelow ’81 uses his expertise in nanotechnology to save daguerreotypes
By Weld Royal '88
Nicholas Bigelow, in his laboratory at the University of Rochester, where he led a team to save daguerreotypes.

The University of Rochester’s Integrated Nanosystems Center Director Nicholas Bigelow ’81 stops work on research he’s leading at the International Space Station later this year to talk about the most unlikely project in his quantum physics career.

It all started in 2005, when conservators mounted an exhibit at the International Center for Photography in New York and became alarmed that parts of unique artifacts on display were disappearing. The show of historic photos of leaders and events included 37-year-old Illinois Congressman-elect Abraham Lincoln, the first photograph of the moon and an image of Harriet Beecher Stowe, before the publication of Uncle Tom’s Cabin. The show had received rave reviews.

“Precious in the very best sense: literally beyond price, and almost, but not quite, beyond praise,” gushed The New York Times. As museum-goers arrived to see the exhibit of 150 mid-19th-century photographs titled “Young America: The Daguerreotypes of Southworth and Hawes,” conservators noticed that the photographs were deteriorating. Some had blistered, and others had formed halos. Parts of certain photos had disappeared beneath white spots. When the two-and-a-half-month exhibit drew to a close, conservators assessedthe damage. About two dozen unique daguerreotypes were severely damaged.

“There was a cry of urgency because you only have one daguerreotype. There’s no negative, and people were worried about losing these incredibly important recordings forever,” said Bigelow, who learned about the problem not long after the show closed. 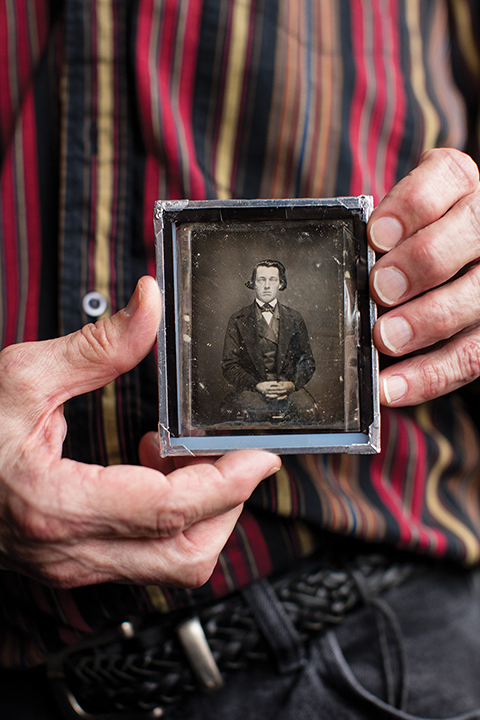 Daguerreotypes are the world’s earliest photographs. They came about nearly 180 years ago in Paris, when Louis-Jacques-Mandé Daguerre unveiled a process that changed the way wars, astronomy, presidents and plain folk would be remembered. In 1839, the French painter and printmaker presented an invention that would create a one-of-a-kind photographic image on a silver-plated sheet of metal, treated with iodine vapors, developed with mercury fumes and fixed with salt water. He called it a daguerreotype. The image’s precision made it a clear choice for capturing political moments and figures through the Civil War era, after which other photographic techniques began to take its place.

Today, a strong collector’s market exists for daguerreotypes. A few years ago, Sotheby’s sold one of 19th-century New York City for $62,000. A small group of aficionados has even started new artsy work using the antiquephotographic process. But historic daguerreotypes are at risk. Bigelow discovered the photopreservation crisis when he attended a lecture at the Eastman House, which has one of the world’s largest collections of daguerreotypes and is just down the street from his physics labs. Bigelow thought his work in nanoscience could help reveal causes for the decaying artifacts and agreed to help conservationists at the Eastman House look for clues. He also believed that the work of daguerreotypists nearly two centuries ago would help scientists today think about new ways to explore problems.

“The daguerreotype is one of humankind’s most disruptive technological advances,” said Bigelow. “Not only was it the first successful imaging medium, it was also the first truly engineered nanotechnology.”

Most people think of nanotechnology as tiny electronic circuits, the processor in their phone or computer. But it’s much more expansive. Nanoscience is the study and control of biological or chemical materials that are between one and 100 nanometers in size. A nanometer is a billionth of a meter, according to Bigelow.

Nanotechnology is all part of Bigelow’s “day job” centering on ultra-cold quantum physics. He studies atoms in the coldest matter that humans know how to make, about a billionth of a degree above absolute zero, known as a Bose-Einstein condensate. With a grant from NASA, he’s working with a team on research at the space station to yield ideas on how atoms behave in near-zero-gravity conditions. There’s a practical purpose to his work. Its results are used to refine sensors, such as gyroscopes, and his experiments could lead to next-gen gyroscopes to help navigate deep space.

Bigelow, who holds a Ph.D. in physics from Cornell University, credits his experience solving problems in Lehigh’s research labs for helping to push him into a career in science.

“I came to Lehigh not really knowing what engineers did but always enjoyed rebuilding things. I ended up volunteering in different labs, including one in the physics department, and I liked working there, making things in a shop, and seeing what people who were physicists did with their time,” he said.

Bigelow also says his Lehigh experience ultimately pushed him to take a job at the University of Rochester.

“Rochester’s undergraduate program is similar in size and scale to Lehigh, and when I was looking at different opportunities, I realized that at Rochester I’d have a chance to get to know students and faculty members, and that was really attractive.

Exposure to some of the world’s leading physicists and mathematicians before college also played a role in Bigelow’s career. He grew up in Princeton, N.J., where his father worked for John von Neumann on a predecessor to the computer at the Institute for Advanced Study, a place where “there’s still so much we don’t know about the world” kind of wonder prevailed. Although the institute’s legendary physicist, Albert Einstein, had died a few years before the Bigelows arrived, the Nobel Prize winner’s thoughts and philosophy still had a huge presence. So did the work of institute scholar Freeman Dyson, a pioneer in modern theory in elementary particle physics.

“When you’re lucky enough to grow up in an environment where curiosity is a valued attribute, it rubs off,” Bigelow said.

Curiosity led Bigelow to connect with the daguerreotype experts at the Eastman House. He had something special to offer them: highpowered microscopes that might be able to see what was happening on the surface of the artifacts. Bigelow worked quickly with Eastman House conservators to put together a National Science Foundation grant application to study the decaying photographs. The foundation gave the team $450,000 through the SCIART award program that funds projects bringing together science and art.

With resources to back the research, Bigelow and his team at the Integrated Nanosystems Center began putting nonmuseum-quality daguerreotypes beneath high-powered electron microscopes to identify culprits behind the damage. They used a scanning electron microscope that scatters electrons off the surface of the daguerreotypes, providing magnification of 150,000 times and analyzing the makeup of any suspicious spot on the image. A transmission electron microscope delivers magnification of up to 300,000 times. They also used equipment for X-ray photoemission spectroscopy. The highpowered devices revealed stuff growing all over the images.

“Highlights such as the whites of the man’s eyes revealed a hidden nanostructure that resembled tiny clusters of white eggs—uniform silver mercury crystals whose images determined the image’s whites and grays,” according to Scientific America, which profiled the groundbreaking research.

The team also saw a kind of mold, which had metabolized residual sulfur and other things that form the structure of the surface that made the image. In other words, mold was eating away the foundation of the image—and that wasn’t all. The physicists saw how a “network of holes” below the thin foil on which the image sits was allowing in substances from the atmosphere and causing the image to exfoliate.

Bigelow’s work has contributed to conservators trying out prototype frames that can seal the daguerreotypes in argon, a gas that can protect the plates from contaminants that cause reactions on the silver surface. Bigelow said his team is also looking at broader applications for the research. “Self-assembling nanotechnology” is an area of intense interest, particularly in medicine, and self-assembly of nanoparticles is what Bigelow and other researchers discovered on the surface of the daguerreotype. It’s terrible for the photographs but promising for drug delivery and other purposes.

“It’s remarkable that something discovered in the 1800s has given us insight into future nanofabrication techniques,” he said.

‹Previous
A Climate of Giving
Next ›
Fighting Superbugs