Skip to main content
Features
Drilling Into What Killed the Dinosaurs
Sean Gulick ‘99G studies an asteroid impact site as record of dinosaur extinction
By Chris Quirk
Geophysicist Sean Gulick on board the L/B MYRTLE Offshore Support Vessel, -a scientific plataform working in the Gulf of Mexico- in front of the Yucatan State, in Mexico.

Sean Gulick ‘99G has spent much of his academic career studying one of the most cataclysmic events the Earth has yet seen. And in terms of pyrotechnics, it doesn’t get much better than this, unless you happened to be a dinosaur.

Gulick, a geophysicist at The University of Texas at Austin, where he is a research professor at the Institute for Geophysics, has been studying the impact crater of the Chicxulub asteroid for more than 15 years. The Chicxulub asteroid, a.k.a. the dinosaur killer, plowed into the waters off what is now the Yucatán Peninsula about 66 million years ago. Gulick, along with his co-chief researcher on the project, Joanna Morgan of the Imperial College London, has recently been able to conclusively determine what had been widely presumed, but oft debated, since 1980, when Luis and Walter Alvarez proposed that the mass extinction of the Earth’s megafauna had to be the result of an asteroid strike.

Even in Gulick’s sober, clinical rendition, the Chicxulub event sounds spectacular. “The 12-kilometer asteroid hit the Yucatán Peninsula, which was under fairly shallow water at that point in time, with an energy equivalent to about 10 billion World War II-era atomic bombs. That instantaneously created a crater,” Gulick says. “In this case, the crater would have been about 100 kilometers across and 30 kilometers deep. Everything would temporarily behave like a liquid. Solid rock was melted by the force of the impact, and it takes huge pressure, something on the order of 60 gigapascals or higher, to be able to turn that rock from solid to liquid by pressure alone.”

In addition to the geological chaos, the strike unleashed tsunamis that would have swamped the coastal regions of the entire Gulf of Mexico with waves as high as 1,000 meters or more. “You know, it's a very bad day in the Gulf of Mexico,” says Gulick. “Besides the tsunamis, you also had significant wildfires, most likely from material that did not stay aloft for years, but rained out of the atmosphere within hours. Those would have caused significant wildfires, potentially across the globe. Anything within 1,500 kilometers of the impact site is killed just by the thermal energy released. Everything within Mexico and out to southern Texas and Florida was all wiped out.”

The 12-kilometer asteroid hit the Yucatán Peninsula, which was under fairly shallow water at that point in time, with an energy equivalent to about 10 billion World War II-era atomic bombs. That instantaneously created a crater. In this case, the crater would have been about 100 kilometers across and 30 kilometers deep.

But for a global mass extinction, you would need to see major global effects. “It has to be atmospheric if you are going to explain something that happened on the other end of the planet,” Gulick says. Lurking in the core samples Gulick took from the Chicxulub impact crater area beneath the seabed was the answer to a nagging geophysical conundrum, and what wasn’t in the samples provided evidence on the demise of the dinosaurs. 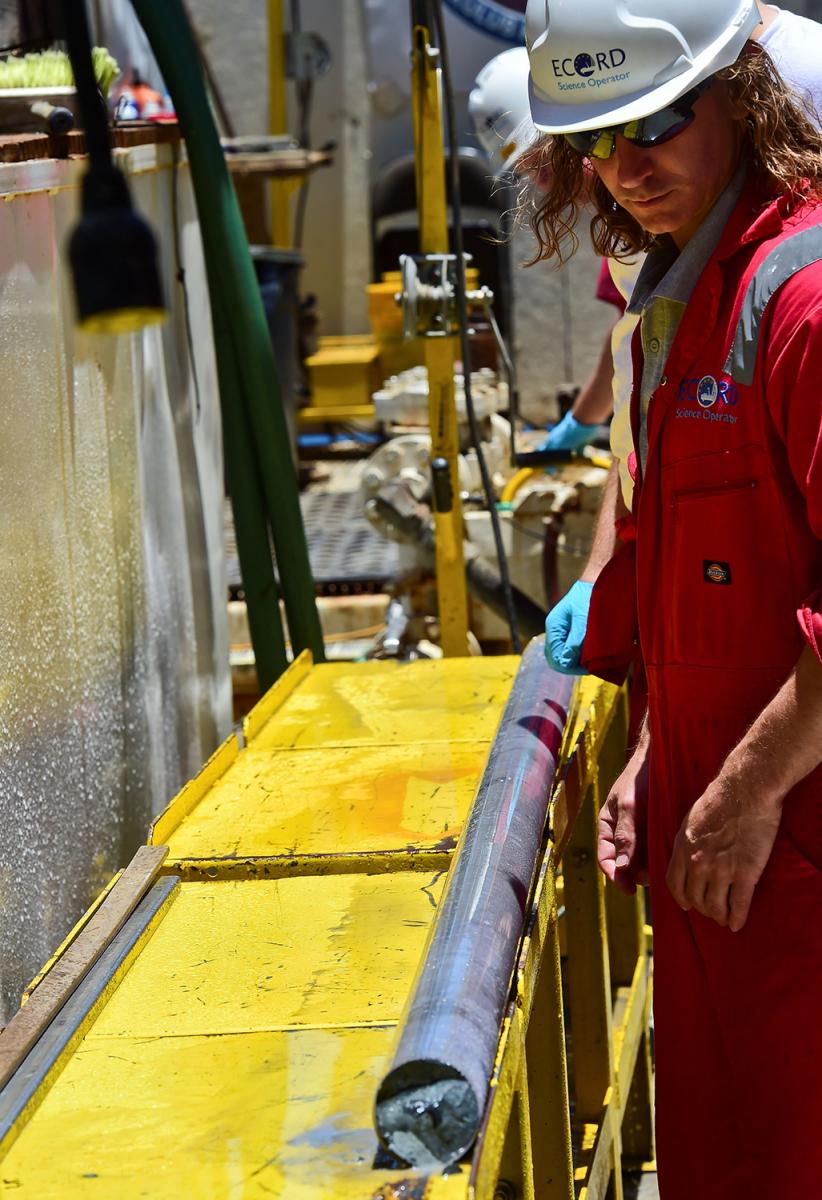 Gulick and the research team drilled and harvested narrow cores of rock in the crater area, starting at around 500 meters beneath the sea floor. As they pulled up core after core, each about three meters in length and each stretching further back into geological history, they began to see some puzzling characteristics in the samples. “At one point, within just three cores, we saw something completely different,” Gulick recalls. “It looked like sandstone, and all the material was dipping in one direction. That’s all we could see on the deck of the ship, and we weren’t opening the cores right then. We’re thinking, wow, what is sand doing on top of a 600-meter mountain chain in the middle of a crater?” The only explanation was a tsunami-like force, and Gulick knew they had found the top of one of the peak rings within the impact crater, created by the rebounding of rock, earth and water following the asteroid’s initial strike.

Then the team pulled up melted rock, then granite, and they knew they were onto something. “What this told us is that all impact cratering works one way–the dynamic collapse model, and not another way–the nest melt cavity model,” Gulick explains. “It’s pretty phenomenal to be able to make such a conclusive statement from a single observation of a single drill core. We began to write a paper for Science magazine before we even split open the cores.”

When they did open the samples, they realized some expected elements were missing. “The rock should have been representative of everything in the target area. So we should see some of the crystal and granite below the sedimentary rocks, we should see limestone, anhydrite and other evaporated ocean sediments known to be in the target. But we did not see any of these evaporites, and so we would argue that a large volume of sulfur must have been vaporized or ejected instantaneously.”

To get an idea of the atmospheric and climatic effect of such a release, consider the eruption of Krakatoa in 1883. The sulfur released in that volcanic event is estimated to have cooled the average global temperature by 2.2 degrees for several years. Gulick and colleagues’ research indicates that around 325 gigatons of sulfur were released by the Chicxulub asteroid strike, on the order of 10,000 times the amount of the Krakatoa eruption. “The dust and especially these sulfate aerosols would have had a residence time of many, many years, in effect blocking out the sunlight, maybe entirely early on, and to a great degree for many years thereafter,” says Gulick. “Think of it as twilight, for years.”

The effects were catastrophic, wiping out about 75% of life on the planet. “There would have been very low photosynthesis, and an average temperature drop of 25 degrees centigrade for perhaps 15 years, according to a recent model,” Gulick says.

If you think the life of a marine geophysicist—hanging out on a boat in the Gulf of Mexico, with occasional shore leave to the balmy Yucatan beaches—seems like an lifestyle free from worry, Gulick is quick to set you straight. “It is exciting but it’s also extremely stressful,” he says. “You spend years writing proposals to get your science done and get funded. Then you have what amounts to a $10 million project, and there is a huge pressure for success and to make sure things go OK. Are the problems on your drill rig going to be permanent? Will something else go wrong that you can’t fix? It’s scary, but it’s an amazing rush when you finally pull up the cores and see a hypothesis tested that you proposed years ago. It’s quite a feeling.” ‹Previous
Greek Drama
Next ›
From Banking to Broadway