Philadelphia playwright Lorene Cary presented the world premiere of her play, My General Tubman at Philadelphia's Arden Theatre Company from January 16 to March 1, 2020. The work, directed by award-winning theatre artist James Ijames, ran at the Arden's Arcadia Stage. Scenic design for the production is the work of theatre professor Melpomene Katakalos.

My General Tubman, commissioned by the Arden Theatre, is a play about the difficult journey of Harriet Tubman and the impact she continues to have today. The production features Barrymore Award-winning performer Danielle Leneé as Harriet Tubman.

The story takes place in the abolitionist era and present day in the Philadelphia prison system. There is this connection in time between the legacy of slavery and the current prison system, Katakalos says, and the play develops in many contexts over many periods of time. The set had to accommodate the notions of constriction, contraction, expansion, and time.

Cary wants to challenge our notions about leadership and what made Harriet Tubman human, Katakalos says. Tubman is presented in a mythical manner. She possesses powers where she can travel through time and come to the present. Tubman meets Nelson, who is incarcerated in Philadelphia for a minor crime. The story is about this notion of cycling people into a system. He can’t get out because he can’t afford bail. He is in this circumstance not of his making. Tubman reaches out to him and emancipates him much in the way she did for enslaved people. 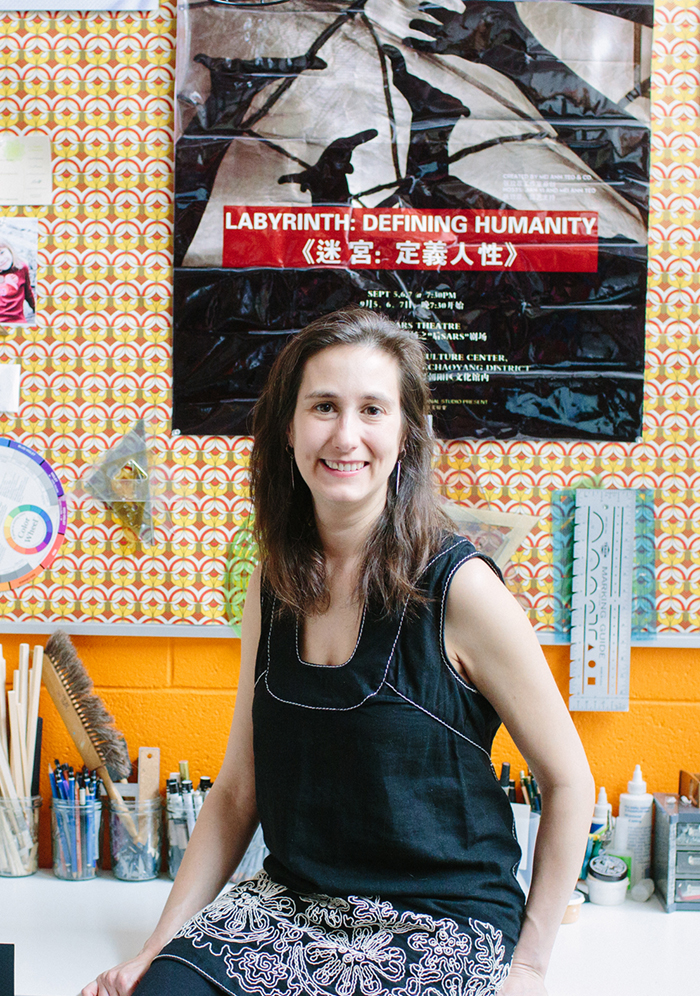 Katakalos included historical maps as inspiration. “The ideas about territory had me looking at maps and having actors step on what felt simultaneously like a map and the earth. I grafted maps of the Underground Railroad on to a topographical map, then I turned the paths of the railroad into rivers. “There’s a metaphor in the play about water and I loved the idea of veins and roads to be water.”

Other materials at play creating a construct of walls and confinement included steel frames. The lack of a horizon line as the walls meet the floor provide a sense of infinity. “It’s a way of inviting the audience in, to make the feel they’re complicit, yet observing.”

Katakalos notes that when she designs these types of productions, the set is designed to provide the director with flexibility and possibility. “I give the director a lot of things to play with as the language of the play changes. It’s very minimal, very abstract to accommodate any time period.”

Katakalos was brought into the project because of her ability to design in ways that are metaphorical and abstract, yet concrete enough to connect to the story.

“This isn’t a generic set by any means. It’s very specific to the needs and the ideas of the play. It’s grounded in what the play has to say but has the flexibility to tell the story in many iterations. It give the set a specificity it deserves.”

“It’s exciting to me that when we design these kinds of things we get to tell a story based in history. It’s a reimagining, but it explores Harriet Tubman, who deserves that. It’s great to have that kind of commitment from a regional theatre, who is committed to staging a world premiere.”

Arden Theatre produces a wide range of stories in a variety of styles. It also shares the voices of new writers, providing the opportunity to shape the future of American theatre. It embraces stories for audiences of all ages and is active in the community.

Katakalos has been a freelance scenic designer, combining the art of storytelling with a compelling environment, collaborative processes, and the dynamics between collaborators. She has been works predominately in San Francisco, NYC, and Philadelphia designing over 100 productions, many of which were world premieres, over the last 20+ years. Her designs have been seen on a variety of stages including La Jolla Playhouse, San Francisco Mime Troupe, Berkeley’s California Shakespeare Theatre, Los Angeles’ Cornerstone Theatre and Philadelphia’s InterAct Theatre. In NYC, she has designed off-Broadway at the Clurman, at HERE Arts Center, La Mama, 45th Street Theatre, and the Triad. Her designs and devised works have been performed at the Beijing International Fringe and the Singapore International Fringe. She has been the director of the New Play Design Lab at the Bay Area Playwrights Foundation, and is a co-founder of San-Francisco-based Crowded Fire Theater Company, which has been producing and commissioning new works for over 20 years.

She has the honor of having her work chosen to represent the United States at the 2019 Prague Quadrennial of Performance Design and Space, the largest performance design event in the world. Among her many nominations and awards are two San Diego Playbill Awards, two Bay Area Critics Circle nominations, two Barrymore nominations, and the honor of Best Set Designer from The East Bay Express.