Skip to main content
Zebrafsh and Vascular Direase
Biology
By Robert Nichols
Kathryn Iovine (left) and Linda Lowe-Krentz explore the involvement of a heparin receptor in the vasculature of zebrafish. 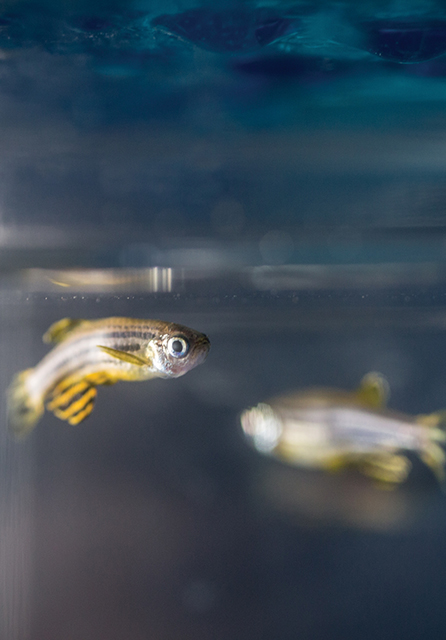 The tiny zebrafish is important to biological researchers. It shares 70 percent of our genetic code, is transparent, can repair its own organs and regrow lost fins. For professors Kathryn Iovine and Linda Lowe-Krentz, the fish might prove to be a chief ally in the investigation of vascular disease.

As part of a collaborative project, Iovine, associate professor of cell and molecular biology, and Lowe-Krentz, professor of biochemistry, are exploring the involvement of a heparin receptor in the vasculature of zebrafish.

Lowe-Krentz’s lab is focusing on an improved understanding of the mechanisms by which heparin alters the physiology of endothelial and vascular smooth muscle cells. Her team studies signaling events in vascular cells that occur in response to heparin treatment. Iovine’s team is interested in how the bones that comprise the zebrafish fin skeleton achieve the correct size. To examine this problem, they explore the regeneration of zebrafish fins.

The project was inspired by hallway chats as Lowe-Krentz, whose work normally focuses on cell lines, was looking for an appropriate animal model. Heparin is an extracellular carbohydrate, a class of molecules that has interested Lowe-Krentz for a long time. Heparin is an anticoagulant (blood thinner) that prevents the formation of blood clots. The drug is used to treat and prevent blood clots in the veins, arteries or lungs. Less studied is the fact that heparin also alters wound repair and inflammation in blood vessels, and heparin is used in treatment of burn victims where excessive inflammation in damaged lungs can be deadly. The zebrafish is a widely used model organism for studying vertebrate development. One of its major advantages is the almost complete transparency of the embryos, which allows researchers to look at individual cells during development. The zebrafish is also responsive to genetics due to its relatively short generation time, typically two to three months. These two features make this organism well suited for expressing green fluorescent protein (GFP) or other fluorescent proteins using transgenic techniques.

The zebrafish is a nice system to do this because it’s easy to monitor the vasculature in transgenic fish that have GFP, which labels all of the blood vessels, says Iovine. Using zebrafish allows researchers to see the blood vessels, which are easily visible in the fins.

“Linda and I have been talking a lot about what they could be doing and what role they could be playing in the way cells communicate with one another. She was thinking about bringing her work into an animal model, and it only seemed natural that we think about fish. We’re doing methods I normally would do studying gene function in the fish, but we’re applying it to the vasculature of the fish.”