Skip to main content
Features
Linking Health, Medicine, and Society
Sociologist Kelly Austin is leading a growing program that explores the intersections of health and society
By Jennifer Marangos
A nurse demonstrates how to use a mosquito net in Western Uganda.

In many ways, Kelly F. Austin’s research is all about connections and helping to create better relationships between the world’s health care system and the people it serves.

An assistant professor of sociology, Austin describes herself as a “macro-comparative sociologist” who is interested in large-scale patterns in development across nations. “Specifically, my research examines global trends in health and environmental outcomes, and the nexus between the two.” 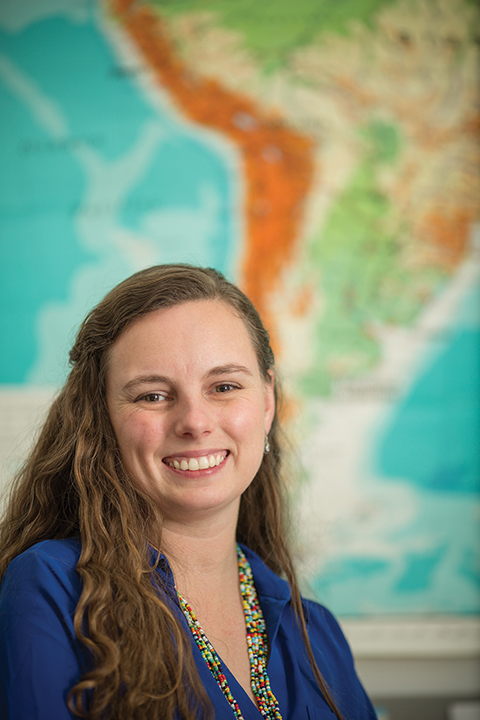 Most of her current published research, she adds, encompasses cross-national projects that use large samples from nations to see general patterns among them. In addition, she typically spends eight to 10 weeks each summer in rural Uganda.

While there, she does a mix of things, including supervising about six Lehigh undergraduate students in their research projects and local internships, as well as furthering aspects of her own research critiquing international health aid and examining patterns in diseases, like malaria.

“One project continued this past summer,” Austin explains, “is focused on unmasking a hidden malaria burden in Bududa, Uganda. A large proportion of malaria cases are missed from official disease statistics in this region due to people self-treating from local drug shops, rather than being tested, treated and counted in a formal clinical setting.”

For this research, Austin interviewed a mix of community members and health workers and also spent considerable time while in Uganda volunteering and working at local non-governmental organizations (NGOs) and health clinics.

Her research transfers to the classroom; Austin is also Director of Lehigh’s health, medicine and society (HMS) program, which, if all goes according to plan, should also be offered as a major, rather than just a minor, in Fall 2017.

It was launched in 2008, and is growing in response to a number of factors, according to Austin, such as increased student demand, enhanced faculty interest and specialization, and changes in the health sector—leading to more jobs in a variety of health fields. The health, medicine, and society field focuses on the social scientific and humanistic dimensions of health and medical care to develop an understanding of the impact of health, illness, and medicine on individuals, families, and societies. The HMS minor serves students who wish to be involved in some aspect of the healthcare industry or health policy and as well as students who are interested in communications, the pharmaceutical industry, law, business, agency work, and other careers where understanding health or healthcare is essential.

Austin began working at Lehigh in August 2012 and says she was attracted to the university because of its support for interdisciplinary research and teaching. “I really enjoy working with faculty and students from across the HMS; Global Studies; Women, Gender and Sexuality Studies; Environmental Initiative, and Africana Studies programs, as each of these touches on a key aspect of my research,” she says. “I also really liked the balance between teaching and research at Lehigh, and how teaching is valued alongside quality research.”

“Many of these students pair the HMS minor with majors in psychology, sociology, political science, global studies, English or a variety of other majors,” Austin adds.

In terms of career paths, many HMS students become health practitioners in some way, such as physicians, physician assistants, clinical psychologists, and physical therapists. “A growing number of minors are interested in careers in public health, with many going on to get master’s in public health degrees, or moving into the public health sector directly as researchers, administrative assistants, grant writers, etc. We have students that have gotten jobs at NGOs, health insurance companies, in pharmaceutical sales, foundations and research groups. I am always amazed at the diversity of jobs that are related to health that our alumni are placed in,” she says.

Still, Austin maintains that while programs like HMS seem to be growing in popularity in public and private universities across the country, the number of them overall is still fairly limited. Few, she says, are as well-rounded as the HMS program at Lehigh.

“One thing that I have noticed in researching other HMS-like programs,” she explains, “is that many programs at other institutions lack emphasis in medical humanities, and instead represent a social science major, or perhaps include one ethics elective. I am happy that our program has medical humanities offerings and faculty that include and go beyond the area of medical ethics. I am also excited that we will be gaining an additional HMS faculty member in medical humanities next year.”

In addition to growing in the area of medical humanities, Austin says there is a subset of faculty interested in community health, and she believes this will be a key area of activity and growth in the HMS program in coming semesters. In fact, the faculty has created a Community Health Research Group (CHRG), which includes three new professors in areas of community health with cross-over in the sociology and psychology departments in the College of Arts and Sciences, as well as the College of Education.

“The CHRG just received a collaborative research grant to do a type of health-needs assessment using a method called ‘photovoice’ where community members take and share pictures of health challenges in their community,” Austin says. This project is set to start in September 2016.

The grant includes funding for student researchers to work with citizens as co-researchers and liaisons. “The CHRG hopes this grant will represent just the beginning of funded, collaborative projects involving faculty and students at Lehigh and the local Bethlehem community,” she says.