Skip to main content
Features
Broken Courage
Jenna Pastorini ’17 examines a trauma-based cultural syndrome in Cambodia
By Robert Nichols
A Cambodian survivor stands in front of a photograph of a prisoner at a former Khmer Ridge prison.

More than 1.7 million people — nearly a quarter of Cambodia’s population — were killed by execution, disease, starvation and overwork under the Khmer Rouge’s brutal rule from 1975 to 1979. Some 40 years later, the resulting trauma permeates much of the country’s culture. Cognitive science major Jenna Pastorini ’17 is attempting to better understand subsequent Cambodian mental health issues as part of a cross-cultural study exploring beliefs surrounding post-traumatic stress disorder (PTSD). 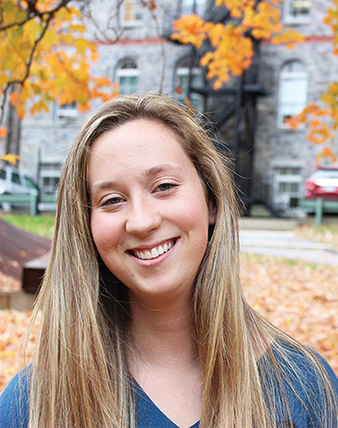 The study is a perfect dovetail for Pastorini. Cognitive science students must write a senior thesis incorporating two of the program’s six academic pillars. As part of her project, Pastorini spent four weeks this past June in Siem Reap and Phnom Penhto gain an understanding of the context and issues surrounding trauma in Cambodia’s cultural context. Two Lehigh faculty serve as Pastorini’s mentors. Jessecae Marsh, assistant professor of psychology, pursues research in the beliefs surrounding mental health issues. Cambodian-born Sothy Eng, professor of practice in the College of Education, provided Pastorini with a variety of connections across the nation, such as at Royal University of Phnom Penh.

“I met with [Nongovernmental Organizations (NGOs)] to develop a baseline working in Cambodia. You have to understand how interwoven everything is. I needed to learn about the government, the policies and the ground-level realities of genocide. I needed to really get a grasp on these factors to begin to understand how they impact mental health.”

Pastorini has previous experience with Khmer culture. She toured the kingdom in the winter of 2015 as part of Lehigh’s Global Citizenship program where she met with members of Transcultural Psychosocial Organization (TPO), an NGO. TPO is Cambodia’s leading NGO in the field of mental health care and psychosocial support. There she learned of baksbat. Similar to PTSD, people with baksbat experience anxiety and depression, yet the disorder possesses enough features to be recognized as a formal cultural trauma syndrome distinct from PTSD.

“Cambodia suffered a horrible loss and they’re still living in the devastation that occurred,” says Pastorini. “Baksbat is an attempt to put a name on what the people are suffering from because their symptoms weren’t properly recognized in the parameters of PTSD. People who experience baksbat are withdrawn from society, cannot find it within them to speak up and do not want to be tuned in. You just want to be passed by. It was something I heard in conversation sometimes, but it was rarely addressed as a mental illness.”

The recipient of GELH and Strohl grants, Pastorini anticipates returning to Cambodia during the break between semesters to continue her research. She hopes to collect data from students at Royal University on PTSD-related issues, then compare the data to PTSD-related information she is collecting from Lehigh undergraduate students.

“I went to Cambodia expecting that nobody would be using the word PTSD, that the only word people would be using was baksbat. Interestingly, baskbat is a verb, not a noun, which makes a huge difference. We don’t say, ‘I am PTSD.’ We say, ‘I have (PTSD).’ I got such an interesting array of answers from Cambodians.”

Pastorini’s work involved meeting with government officials, staff at a children’s hospital and officials from Caring for Cambodia. At the end of her trip, Pastorini discussed her work with Sotheara Chhim, TPO’s executive director and a renowned Khmer mental health researcher, who coined the term baksbat.

“Baksbat is not something that’s commonly talked about because most everyone suffers it,” she says. “Everyone has a story, so they don’t really look to care for people’s repercussions because everyone suffered the repercussions. It’s such a different collectivist perspective than America, which is so individualist. It was interesting to see that difference. Many people had never heard of baksbat as a mental illness, so there was this discrepancy between what I was expecting to hear and what I actually heard.”

Aspiring to be a psychiatrist, Pastorini hopes to attend medical school after graduating from Lehigh. She says she also envisions possibly returning to work for an NGO in Cambodia.

“The Cambodian government allocates 0.02 percent of its health budget to mental health. There isn’t easy access for people suffering from mental illness. There is also a lack of psychiatric education and the overall idea of mental health illness is still new. A large population of Cambodians don’t yet know how to recognize it. They do not know there are resources for them, if there are any. The government isn’t putting them in a place to easily access that help.”

Pastorini hopes to fill that gap.