Twenty-five feet: It’s the unspooled length of a construction worker’s tape measure or the distance between the bumpers on a midsize RV. It’s also a span that Myla Goldman ’94 has marked off in a hallway at the University of Virginia, where she is assistant professor of neurology. 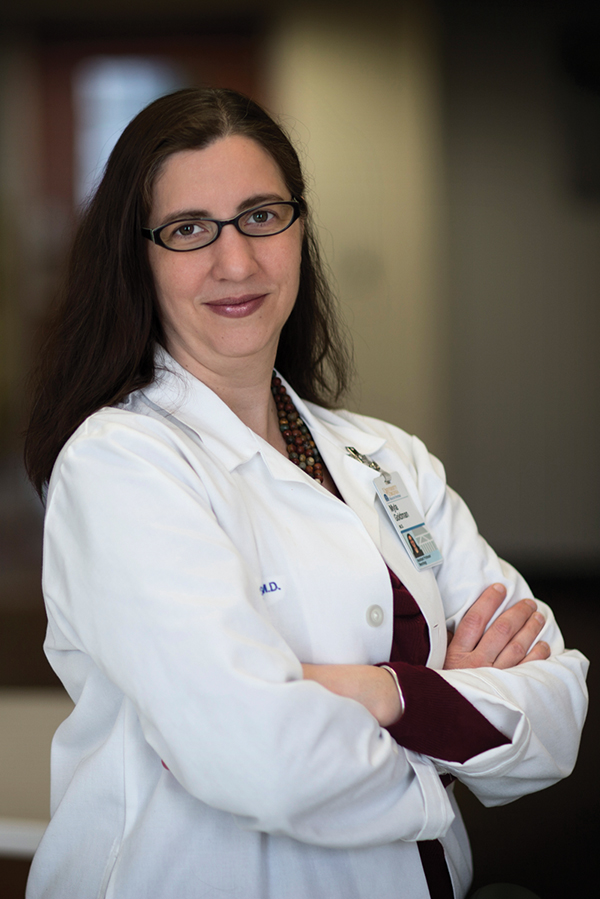 The simple act of walking those 25 feet is at the heart of Goldman’s research establishing reliable measures of function for people with multiple sclerosis (MS). “My contribution has been to improve the understanding of what is clinically significant in a timed 25-foot walk,” Goldman says. “On the surface, the difference between walking it in six seconds or eight may not seem like a big deal. But when you look at what else people with MS are doing or not doing, those two seconds become very important.”

As a medical test, the timed 25-foot walk, or T25FW, is remarkably low-tech and inexpensive: Say “go,” and a patient walks the distance as fast as possible. Demonstrating that the T25FW reveals a great deal about limitations associated with MS—an autoimmune disease that attacks the central nervous system—is a critical step in evaluating drugs to treat the disabling condition. “Prior to the 1990’s, there were no drugs for MS,” Goldman says. “Since then, there have been 10 FDA-approved therapies—a nearly vertical climb. So there’s a lot of interest in how to effectively measure their impact.”

First Steps
Goldman’s interest in neuroscience was already evident when she enrolled at Lehigh as an undergraduate in 1990. “At the time, few universities had programs, but Lehigh had a well-established program in behavioral neuroscience,” she says. Coming from a lower-income, single-parent household in the Chicago area, she also benefitted from Lehigh’s financial aid. “Generous assistance allowed me to be among the first generation of women in my family to go to college,” she says.

While working in the lab of Professor Jill Schneider studying how neuroendocrine signaling influences the estrous cycle in a hamster model, Goldman sought a summer research scholarship and met with John Nyby, professor of biological sciences. He recognized her as a good candidate for medical school, which she hadn’t considered. After completing her Bachelor of Arts degree, she stayed on as a technician in Schneider’s lab while applying for med school.

Her four-plus years of lab work at Lehigh taught Goldman how to think critically, execute research protocols and communicate findings, with some of her research published in peer-reviewed journals. On a personal level, working with Schneider showed her how to successfully balance professional and family life. “The mentoring I experienced at Lehigh really changed the trajectory of my life,” Goldman says.

Through MD training at Rush Medical College in Chicago, residency in neurology at the University of Virginia and, especially, fellowship training at the Cleveland Clinic, she honed her focus on multiple sclerosis. With the benefit of a National MS Society training grant at Cleveland, she began to ponder the real-world implications of what happens to MS patients during timed walking.

Her work provided initial data that in 2009 led the National Institute of Neurological Disorders and Stroke (NINDS) to give her a five-year grant called the K23 Mentored Patient-Oriented Research Career Development Award.

“That was a significant step for me,” says Goldman, who took a tenure-track position at UVA in 2006. “It funded most of the research I’ve done since becoming a UVA faculty memeber.”

“The holy grail is neurorestorative therapies that help people get better,” she says. “If a treatment outcome showed that someone who once walked nine seconds started walking five, that would be huge.”

Tracking Effects
It’s not enough to know that a drug might improve a manifestation of MS such as the amount of disordered plaque forming on nerve fibers.

“A better outcome measure demonstrates a real-world impact on people’s lives,” Goldman says. People with MS almost by definition suffer loss of mobility. But if one person is slightly less disabled than another, how does that translate to what they experience every day?

For insight into that question, Goldman surveyed the patients she had hoofing her timed 25-foot walk down the hallway. In addition to clocking their T25FW speed, she asked about an array of everyday activities of daily living such as whether they were employed or if they could do their own laundry.

In a study published in the October 30, 2013, issue of Neurology, she and her colleagues found that doing the T25FW in eight seconds or longer was associated with using a walker, being unable to do instrumental activities of daily living and collecting government health care and Supplemental Security Income. A slightly faster—and therefore higher-functioning—speed between six and eight seconds was associated with job change, walking with a cane and needing “some help” with instrumental activities of daily living. Both groups had functional limitations to some degree. But Goldman imagines their differences in the context of clinical trials—for example, if one group of six-minute walkers got a drug and kept the same pace over time while a second group got a placebo and slowed to eight minutes due to increased disability.

“What that would tell you is that the drug potentially kept people employed and more functionally independent,” she says.

The research also linked T25FW performance with 12 of 13 other measures of disease severity. “Previously, it wasn’t clear how much walking you needed in order to capture that information,” Goldman says. “Did you have to follow people for a week with accelerometers?” Her research found that a gambol down a hallway distills what happens in more prolonged walking.

Published by the American Academy of Neurology, the study marked another professional milestone for Goldman: The academy highlighted it in a press release, and it received national coverage. Her research in walking tests has helped to develop two clinical trials for existing drugs that slow disease progression.

“The holy grail is neurorestorative therapies that help people get better,” she says. “If a treatment outcome showed that someone who once walked nine seconds started walking five, that would be huge.”

With her five-year NINDS grant expiring, Goldman is now looking into new funding for further research, including a growing interest in how comorbidities such as how prediabetes and weight gain clinically relate to MS. She’s also pursuing her other major goals—like being a mother to her five-year-old son and two-year-old daughter.

“As I learned at Lehigh from Jill and others, it’s possible to be a mom, a scientist and a physician,” she says. “It’s important to realize that with the right support, you can do all those things successfully.”

‹Previous
Method Acting
Next ›
The Dance of Life