The Leon Springs pupfish is struggling to survive, and for the past 14 years, Murray Itzkowitz has been a leading voice in the conservation of this endangered species. 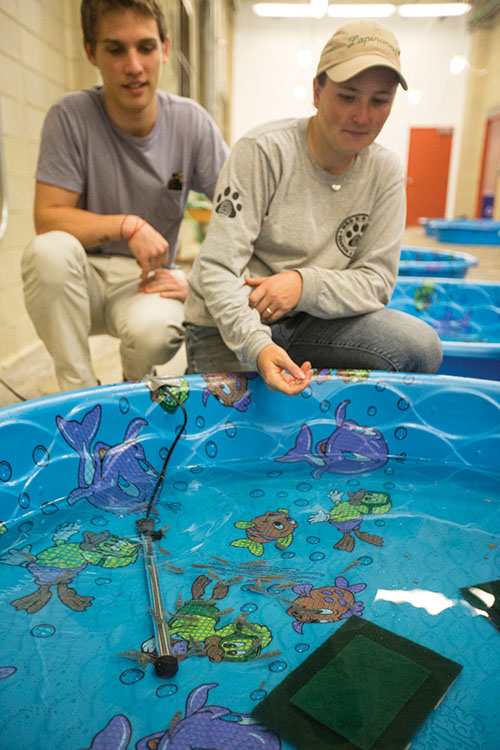 This two-inch creature is found in only one or two very small, isolated desert springs near the Big Bend region of west Texas and has been on the verge of extinction since it was found to be not extinct about 50 years ago.

“They are a clunky kind of fish that could not compete effectively with more advanced species of fish like minnows, and they’re not very good at avoiding predators,” says Itzkowitz, professor and chair of biological sciences. “They survive by living in water that their competitors can’t tolerate. At various times during the year, largely in the summer, the water temperature and salinity reach lethal levels for most other species of fish.”

Funded by the Texas Park and Wildlife Department, Itzkowitz travels frequently to Stockton, Tex., to study these fish. He has two hypotheses as to their decreased populations. First, bulrushes, a grass-like aquatic plant, are taking over critical spawning areas in the pools. His second hypothesis was that Gambusia nobilis, another small, endangered fish, was feeding on the eggs of the pupfish, in part because the constriction of their habitat was forcing them into pupfish spawning areas.

The trouble, he says, is that these pupfish are so highly endangered that while researchers can cull the bulrush and improve the habitat, they cannot perform experiments on the protected fish.

“It’s difficult to answer basic questions like, what does it take to establish a new population because we’re in the business of protecting them, not experimenting on them.”

In response to Lehigh’s Mountaintop Initiative and in collaboration with Michael Kuchka, associate professor of biological sciences, Itzkowitz guided a team of six undergraduates and two graduates in a 10-week summer project to develop an animal model that may guide further conservation practices of this species. They used a species that is very similar to the Leon Springs pupfish but is not endangered, sheepshead minnows (Cyprinodon variegatus), which are extremely common along the east coast of the United States. Housed in Lehigh’s new Mountaintop facility where space is abundant, the study involves 10 kiddie pools measuring six feet in diameter, where students test their hypotheses. The basic idea was to study ecological and behavioral aspects that may influence the fish’s breeding biology. Students also used modern molecular genetics tools to examine hypotheses about the reproductive success of specific individuals.

This new opportunity at the Mountaintop campus coincides with Lehigh’s push to give its undergraduates a learning environment that couples important problems in science with a research-intensive environment. At the same time, Itzkowitz and Kuchka hope that this venture will contribute to the restoration of pupfish populations in their native West Texas waters.