Skip to main content
The Kilodegree Extremely Little Telescope
Physics
By Robert Nichols
A picture of the center of the Milky Way galaxy taken from the first night of observations by the KELT-South telescope.

Joshua Pepper, an assistant professor of physics with a specialty in astrophysics, helped invent the Kilodegree Extremely Little Telescope (KELT) a decade ago. His team has discovered 10 exoplanets, or planets orbiting other stars, in the Milky Way galaxy, the huge system of stars that contains our solar system. 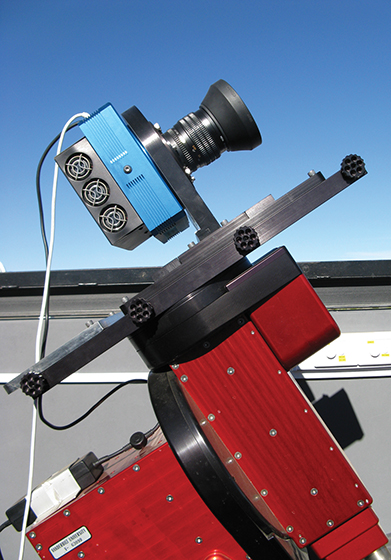 Pepper searches for planets orbiting bright, nearby stars, which are all less than a thousand light years away. While thousands of exoplanets have been discovered so far, those orbiting nearby stars are extremely valuable because they can be studied in great detail.

There are two KELT telescopes—one in Arizona and one in South Africa. “There’s a trend in astronomy to build bigger telescopes because many astronomers want to look at fainter and more distant objects that tell us about the structure and evolution of the universe,” Pepper says. “That’s great for understanding galaxies, but to find planets orbiting nearby stars, we need a different style of observing.”

Because the stars that KELT observes are so bright, Pepper does not need the large telescopes commonly used by other astronomers. KELT uses lenses that are just two inches wide and that simultaneously observe tens of thousands of stars once every two-and-a-half minutes, hour after hour, night after night, for many years. About one in every 10,000 stars has a planet orbiting it that is oriented so that it crosses the face of its host star from Earth’s line of sight. That eclipse of the star by its own planet causes the brightness of the star to dim just a little bit each orbit.

After identifying stars showing regular dips in brightness, Pepper works with an international network of amateur and professional astronomers to determine if a planet is present. To do so, they measure the star’s radial velocity, or wobble. If KELT has detected a real planet, the host star will wobble back and forth as it is tugged by the planet’s gravity. If the patterns of the wobble and dips match up, it verifies that the planet is real.

“These telescopes have turned out to be wildly successful,” he says.