Urban air pollution is a growing problem. The commercial and residential building sector accounts for 39 percent of carbon dioxide (CO2) emissions in the United States per year, more than any other sector, according to the U.S. Green Building Council. Air remediation efforts have mostly been legislative or overreliant on new technology, and existing and new architectural technology has yet to fulfill its potential, but a photocatalytic cement being studied by Nik Nikolov might provide some solutions. 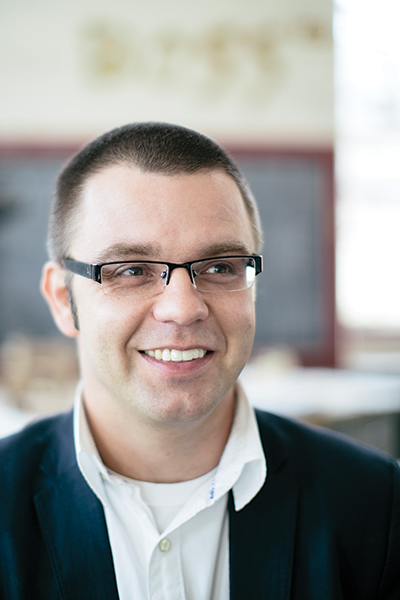 While the cement has been used in Europe since the 1970s, Nikolov is exploring cement containing titanium dioxide, which acts as a photocatalyst when exposed to daylight, and the reaction takes place in perpetuity. The photocatalytic reaction converts hazardous nitrogen oxide into harmless nitrates. On a sunny and clear day, the process can eliminate up to 90 percent of air pollutants, according to specifications of similar commercially available products. In cloudy skies when the UV radiation is low, up to 70 percent of the pollutants can still be eliminated.

“Simply put, it’s an exchange of molecules,” says Nikolov, associate professor of architecture in the department of art, architecture and design. “Electrons get exchanged, and all they need is a source of energy. In this case, it’s sunlight. Light from the visible and infrared parts of the spectrum is the most energy charged, so when it hits the titanium dioxide, the molecules start to jitter and the titanium pulls an extra oxygen molecule from common air pollutants like carbon monoxide and carbon dioxide. The result is the formation of nitrates, which are nonreactive and can be washed off a building. As long as there’s a source of energy, the sun, the photocatalytic process occurs.”

Together with Clay Naito and John Fox in the PC Rossin College of Engineering and Applied Science, Nikolov is constructing vertical building panels built of this material. The group began with a computer algorithm that employs data from site conditions to modify a given surface geometry for maximum photocatalytic activity. In resulting simulations, the team demonstrated a substantial increase in photocatalytic reaction. Consequently, 6-foot-by-6-foot cement panels were fabricated and tested for photocatalytic activity—and the results compared to initial computer simulations.

“There is an opportunity for buildings to actually remove pollution from the environment, sort of like what trees do,” says Nikolov. “They may not look like trees, but buildings can perform like trees with this material.”

Working in this matter requires that sunlight be cast directly on the panels for optimal energy efficiency. This requires that computational methods for design must be employed by architects. Nikolov’s computer simulations and Naito and Fox’s material tests leave the team confident that the analytical data is scalable. The large-scale effect of using photocatalytic concrete in building facades will positively and continually contribute to air pollution remediation, Nikolov says.

"The accessibility of parametric design software and proliferation of, and accessibility to, digital fabrication tools have changed the game for the building professions. Established practices of mass systematization and production are being challenged by new materials, design and production workflows and performance-centered lifecycles,” Nikolov says. “This could lead to a new kind of aesthetic. With software, we can find the relationship between the built environment and nature to be much more responsive. In a world of diminishing resources, we need our materials to do more for the environment.”