Skip to main content
Features
A Multimedia Career
After 40 years in television, a Lehigh alum puts pen to paper as novelist
By Leslie Feldman

As a high school senior, Jeffrey Diamond ’72 spent quite a bit of time with his parents researching different colleges and universities around the northeast hoping to find a place that was strong  academically and provided a curriculum that would give him plenty of flexibility. He applied to a number of universities, but ultimately chose Lehigh because it offered a diverse range of subjects in different disciplines. The university also offered a wide range of extracurricular activities, had a great radio station and a terrific sports program. Diamond majored in history with a focus on American intellectual history, wrote a senior thesis on social Darwinism and graduated summa cum laude with departmental honors.

“I was probably destined to go into television from the time I was a little boy, even though this was the last career path I thought I’d follow when I got to Lehigh as a freshman in 1968,” explained Diamond. “At that time, I was one hundred percent certain I wanted to be a doctor. It was almost a passion. I loved biology. I loved chemistry. And I thought medicine was a noble career where I could fulfill an inner need to help my fellow man.”

But as a sophomore, Diamond met history professor Joseph Dowling who was instrumental in altering his career path and launching him down the road to becoming a documentary producer in television news. It was through Dowling—who was also his advisor on his senior thesis—that he learned how to think, how to reason, how to do research, and how to write—all critical components of storytelling.

“From the time I was a young boy, I remember sitting in the back row of a control room watching my father, who was a live TV director, orchestrate coverage of major news events—from space launches, election night coverage, and daily news programming to political conventions, presidential inaugurations, and countless other breaking news specials that aired on the CBS television network,” said Diamond. “Growing up, I worked on many of these broadcasts as a page or an intern, including the 1968 political conventions in Miami and Chicago. I was fascinated by the whole process of newsgathering, of determining what stories were important, and the soup and nuts of the production process that were required to put a live event on television.”

The prompt that ultimately pushed him into television news was a course in film appreciation that he took during his senior year at Lehigh as he was applying to law school. The course focused on some of the great American films, including The Maltese Falcon by John Huston, I by Frank Capra, and Citizen Kane by Orson Welles. He found himself waiting all week for each class, fascinated by what he was learning about filmmaking and eager to write a term paper about each film that analyzed technique, production values and storytelling.

My four years at Lehigh taught me how to be curious, how to do research, write, tell stories, and how to be disciplined in my work ethic.

“So, for me, it was this moment in my Lehigh life when it all came together—my childhood experiences watching my father direct in control rooms, working on some of his television programs, taking history courses with Joseph Dowling where I learned about research and writing, and finally, this elective in film appreciation that I took my senior year that launched me down the path that became my life’s work.”

During his years at Lehigh, Diamond was member of Tau Epsilon Phi and involved in Greek Life. He was also part of the staff of the Lehigh radio network.

“So, I remember my four years at Lehigh as being absolutely amazing and enriching and challenging. They helped mold me into the person who I am today.” 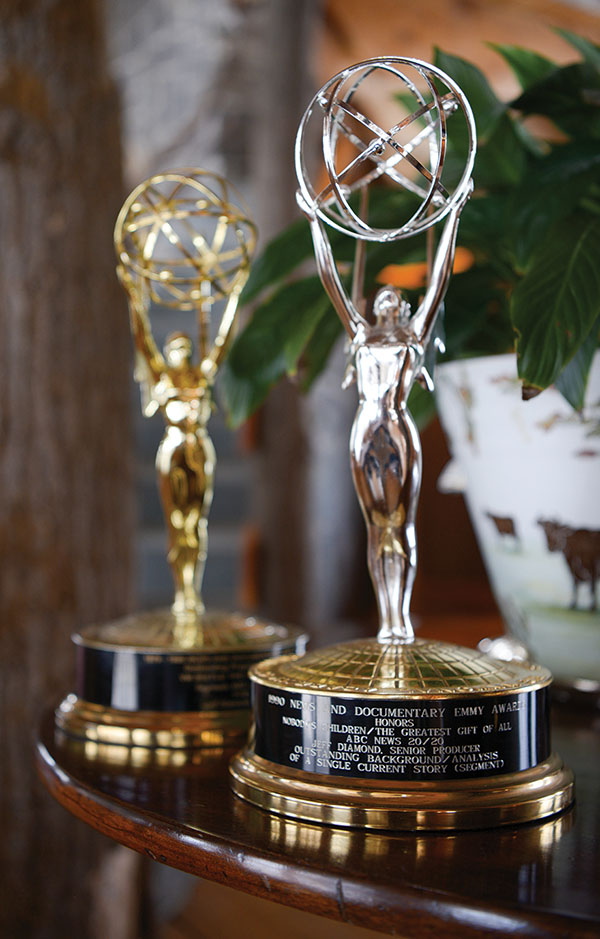 Over the course of his 40-year television career, Diamond worked as a writer, director and producer, collaborating with some of the biggest names in the business, including Barbara Walters, Peter Jennings, Charles Gibson, Jane Pauley, Stone Phillips and Martha Stewart. He was a  segment producer and senior producer at ABC News 20/20 and the creator and executive producer of Dateline NBC. He also ran Martha Stewart Living Television for nearly two years in the mid-1990s. During his career, he won six Emmy awards, two Columbia Dupont Awards, two Cine Golden Eagle Awards, a Peabody Award and many others.

Since he retired from broadcasting, Diamond has continued to produce and direct short independent films and has launched a second career writing murder mysteries based on some of the stories he produced during his career. Creating a fictional producer named Ethan Benson, he has written four books in his thriller series: Live to Air and Live to Tape, both available at most online bookstores, Live to the Network, which will be published this fall, and All Cameras Live, which is currently in editing.

So, my transition nearly a decade ago from television news to murder mystery writer wasn’t really a transition at all. It was the next logical step in my life journey, the latest challenge in my long career, from writing scripts to writing fiction, to reporting on reality.”

Diamond added: “I am happy, energetic, fulfilled, and still motivated to continue telling stories. All of this can be traced back to my four years at Lehigh University, where I matured as a human being and was launched on the journey that has become my life.”

Today, Diamond lives in the Berkshire Mountains with his wife, Amy, of thirty-eight years. He has two sons, a daughter-in-law and two grandchildren. He is an active board member of the Austen Riggs

Psychiatric Hospital and the Berkshire Film and Media Collaborative in western Massachusetts.

For Diamond, going to Lehigh was probably the single most important decision he ever made.

“Lehigh helped me build character and fortitude and molded me into a thoughtful and caring human being. It gave me choices in my academic career that allowed me to sample different curriculums and explore different areas of learning. It helped me mature into a successful adult, and then prepared me, not only for my professionalcareer, but to live a happy, balanced, and fulfilling family life as a husband and a father and a grandfather. I think high school students searching for an institution of higher learning can’t possibly make a better choice than spending their four years getting an education at Lehigh University.”

Diamond adds that giving back as an alum is all about sharing stories about his career and how everything he achieved in his life is rooted in the years he spent learning and growing as a human being at Lehigh University.

“My four years at Lehigh taught me how to be curious, how to do research, write, tell stories, and how to be disciplined in my work ethic. These are the critical skills and values that have helped me to build my career in both television news and as a novelist. So, for me, it is important as an alum to share my life experiences as a student and as a professional with the young men and women who are now studying at Lehigh, so they can see that if they put their minds to it and take advantage of their four years, that they too can prepare themselves to go out into world and achieve their dreams, whatever they might be." ‹Previous
Out Front
Next ›
A New Path