High school senior Ian Cheung does not put math at the top of the list of lessons learned from the Lehigh Valley American Regions Mathematics League (ARML), a national competition for high school students. He writes, “Math may be what we practice, but it isn’t why we practice.”

When Cheung tried out for the Lehigh Valley team four years ago, he was stunned to be placed on the fourth-string team, behind students with similar talent. Ultimately, he concluded that talent had to be combined with study and practice. This realization was “critical to my development,” says Cheung, now captain of the ARML A team. 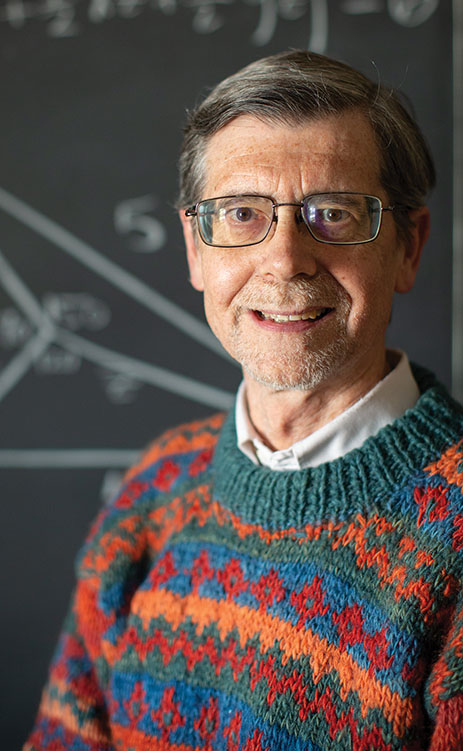 Hundreds of students have learned similar lessons and entered adulthood knowing that collaboration and teamwork can lead to success. They credit Lehigh Professor of Mathematics Don Davis, who some 25 years ago gathered a group of high schoolers interested in competitive math. Davis had no clue then that today he would be leading a nationally known force in high school math competitions but, more importantly, that his impact on young students would be so consequential.

Davis, whose research is in the field of algebraic topology, recalls the team’s modest origins: “In 1981, teaching a Lehigh calculus class, a student asked if Lehigh had a math contest like some other colleges, to encourage local high school students’ interest in math.” Twelve years later, a local high school sophomore who had been on a central Pennsylvania ARML team suggested forming a Lehigh Valley ARML team.

In time, the Lehigh Valley ARML A team, named Fire, won four national championships—in 2005, 2009, 2010 and 2011. The team was second in 2007 and 2012 and third in 2018. The Lehigh Valley chapter now fields four other teams (Ice, Lightning, Thunder and Storm), which do very well, too. Spots on one of the 15-person teams are coveted, with some traveling more than an hour to practices—like Cheung, who lives in Scotch Plains, N.J.

According to The Chronicle of Higher Education in 2011, Davis has “built his small corner of eastern Pennsylvania into a powerhouse for competitive high school math. His students regularly burn teams representing entire states or large cities in regional and national competitions.”

But the value of the program is not just in winning, although, Davis admits, “they like to win.

“Smart math kids get to know other kids like them,” Davis says. “They can also expand their talents. Most of the kids didn’t know there were kids smarter than them or like them. Kids make friends. They gain confidence.”

Davis makes sure that in the qualifying rounds, some of the questions can be answered by students on all levels, so no one goes home feeling that they can’t answer anything.

Davis, the son of a physician who was born in Kentucky and grew up in Ohio, found he had a propensity for math and liked teaching it. He earned his undergraduate degree from Massachusetts Institute of Technology (MIT) and his Ph.D. from Stanford University. The accomplished ultramarathon runner who loves baseball stats is the author of The Nature and Power of Mathematics. He moderates an algebraic topology listserv with more than 2,000 subscribers and is executive editor for the journal Homology, Homotopy and Applications.

“The kids now are extraordinary,” he says. “They are much smarter than I ever was.”

At the Sunday practices in Maginnes Hall, he makes sure they work together in groups. Davis and his assistant coach, Ken Monks ’89G, a former Ph.D. student of Davis’, expect the students to learn math principles on their own. What they can’t do on their own is interact with peers.

“We killed them in the relays,” says Davis.

But what team members recall is Davis’ unfailing mentoring. Such is the case with Matthew Kilgore, Lehigh ’15, who attends MIT.

Kilgore, who earned two bachelor’s degrees and a master’s degree from Lehigh, was invited to join ARML at age 12 in 2007. His mother, Brita Kilgore, says her son, a homeschooled student who has spinal muscular atrophy, had reached a point where she needed more math expertise. She found Davis’ ARML website.

“My son said the practice tests were too hard, but Don was welcoming and said the tests were supposed to be difficult,” she recounts. “From the moment Matt was on the team, he was part of the team.”

The coaches, she adds, instill “the desire to work as a team. The coaches stress ethics and integrity. Don has given so much time and so much to these kids. They can tell they have his full attention, and he is on their side.”

The annual ARML competition is held simultaneously at four U.S. locations. For the Lehigh Valley team, it begins with a Friday afternoon bus ride to Penn State and continues into the evening when a winning original math song is chosen. In 2009, the team, at the top of its game, won not only the national competition, but best song.

Monks recalls the 2005 competition, which was the first national championship. The father of a junior on the team, he recalls that as the announcer counted down the top teams, the Lehigh Valley students wondered if they didn’t make the top 10, or finished higher.

“As they announced the second-place team, I witnessed something extraordinary,” Monks says. “Our Fire team was seated in the auditorium in a single row of 15 consecutive seats. All 15 students grabbed the hands of their teammates on either side of them, forming a single human chain as a unified team as they awaited the announcement. ‘And the winner is ... Lehigh Valley!’ The entire team went wild. They were cheering and hugging.”

It was a pivotal moment for the coaches, too, confirming that team spirit was as important as a trophy.

The team’s reputation grew and so did the logistical demands of running practices for 80 students. The coaches depend on dedicated parents, not only for the Penn State competition, but for the Princeton University Mathematics Competition and the Harvard-MIT tournaments each year. They produce yearbooks, serve as proctors and run concessions at practices.

Sponsors, like Paul Martino ’95, also contribute to the team’s success. As an eighth-grader studying fractals, Martino’s mother read about a fractal art show Davis was curating. Typical of Davis, they kept in touch. Martino, who runs a successful venture capital fund, and his wife, support the team and established the Aarati P. and Paul. J. Martino ’95 Endowment Fund.

Davis, 73, a devoted grandfather, could retire—but there is a lot to do. During winter break, he crafted problem sets and activities for the March qualifying exams, expecting some 300 students. He is running spring practices with an optimistic eye toward the May 31-June 1 Penn State national competition. And there is the end-of-the-year picnic (Davis is famous for his lemonade) and organizing next year’s teams.