She never saw it coming.

Jessie Garcia ’12 ’13G, then a sophomore and playing prop for the Lehigh women’s rugby team, was racing for what she thought was a sure try when she was blindsided by a crunching tackle and pounded into the turf.

Talk to a boxer and they will tell you that the hit that does the most damage is the one you don’t see. Garcia shook it off, returned to play and didn’t think much of it. 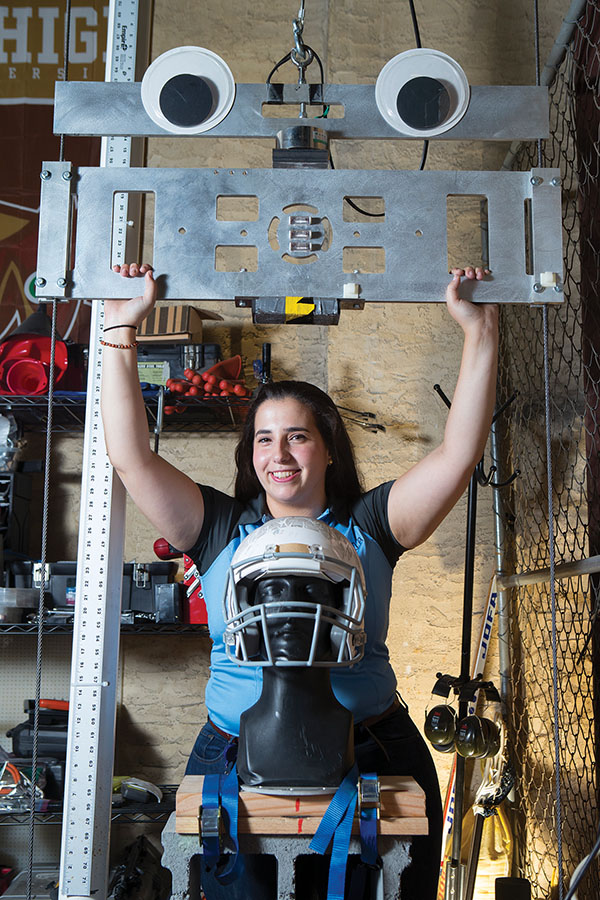 “I figured as long as I wasn’t knocked out cold, it was fine,” she said.

A few days later, Garcia received a call from her coach.

“The coach said that she had cringed when she saw that tackle on the game footage and the hit my head took,” Garcia recalled. “She said after the play, I was a little wobbly.”

By that point, Garcia was experiencing symptoms that would stay with her for months, symptoms that might have been avoided, at least in part, had she received prompt treatment. She suffered chronic headaches, as well as decreased cognitive abilities that she feels led to a decline in her grades that semester.

Garcia completed her bachelor’s degree in global studies and immediately enrolled in Lehigh’s technical entrepreneurship master’s program, which trains students to find innovative ways to create new products and develop businesses that solve real problems. It didn’t take her long to come up with an idea.

“We want students to apply creativity to every aspect of the program, from creating products, to prototyping and financing.” said Mark de Vinck, Dexter F. Baker Professor of Practice in Creativity, who taught Garcia’s course on creativity and systematic innovation.

Garcia thought back to her undiagnosed concussion.

Moreover, harrowing stories of professional football players suffering from Chronic Traumatic Encephalopathy, caused by repeated head traumas, were prevalent in the media, and it was becoming increasingly clear that youth players were at greater risk than had been thought as well.

Garcia decided to do something about it. She began researching head impact sensors already on the market and learned that the costs for the sensors and systems that go with them were prohibitive.

“There was an electronic mouth guard with a head impact sensor, and I thought, great, but it was $199 for one of them, and you needed a device and portal to monitor it. That’s not going to work for kids,” she said. “Besides, people hate mouth guards.”

The price of a helmet detection system could run hundreds of dollars per player.

So Garcia went in an entirely different direction and came up with a low-tech sensor that players can stick on the back of their helmet. If a player is hit with enough force, the clear plastic device turns red.

Philadelphia Inquirer
Tozuda’s sensors turn from clear to red when a potentially concussive hit is detected.

The simple design of the sensor avoids many problems of the high-end, high-tech, networked products on the market.

“To come up with a physical product is a challenge to begin with, but it was especially noteworthy for Jessie, who did not have an engineering background,” said de Vinck. “She looked at her own history, and then beyond, and identified an urgent problem. What was really noteworthy about the direction she took to solve it was that there a lot of companies doing tech in the sports market, and she figured out a totally different way of approaching it and launched this product that could change people’s lives for the better.”

Another thing that impressed de Vinck was that while working on the design, Garcia was simultaneously figuring out the tools and testing protocols she would need to check the viability of the product.

“I thought that was amazing,” said de Vinck.

After completing her master’s degree, Garcia created a company to manufacture and market her new sensor. When it came time to name her company, there was only one option: Tozuda.

“My Cuban grandmother used to call me that all the time,” explained Garcia. “It’s Spanish for hardheaded—in a good way.”

After a successful Kickstarter campaign to raise start-up funds, Tozuda is now ramping up production and will be fulfilling its first orders this spring.

Chris Basilico ’10 ’12G is a part-time technical adviser to Garcia and has been working with her to bring the Tozuda sensor to market. In the creation of a seemingly simple device, they have gone through scores of iterations to obtain the highest reliability and ensure the accuracy of the sensor, which has meant extensive G-force testing in their South Philadelphia workspace.

“The quality and reliability are the most important aspects, so our users can depend on the sensors,” Basilico said. “We created our own testing apparatus, with a highly sensitive accelerometer, and we have gone through hundreds of sensors, refining the design and validating the product. On the financial side, Jessie has been working hard to keep the price of the sensor down so we can get them to youth football teams because we think that’s really where it could have a big effect immediately.”

The counterintuitive, spring-based design that Garcia has produced has more advantages than cost over better-heeled competitors. The sensor needs no battery, no charging and no connectivity—luxuries not always found on playing fields. The easily visible sensor on the back of a helmet also means that players, coaches and officials on the field can all see if a sensor has been triggered by a hit, and the player can then be taken off the field for evaluation. As the Tozuda’s tagline goes, “If it’s red, check your head.”

“For kids who have fewer opportunities, they will try to maximize their chances for achievement and take risks that shouldn’t be taken,” she explained.

“It’s way more complex than I first anticipated. The kids want to better themselves,” she said. “They see sports as a way out. So there’s a lot more riding on it on an individual level, rather than just, ‘Hey, it’s a Pop Warner football game.’ I feel like I became a very empathetic person through global studies, and I need to use that same mindset to listen to what the people who use the sensor are saying.”

‹Previous
Math as a Competitive Sport
Next ›
Out Front