Akin Babatunde is directing a February rehearsal of his Lehigh production of August Wilson’s “Gem of the Ocean,” which revolves around a 285-year-old washer of souls in 1904 Pittsburgh. For a good 20 minutes he doles out tough love to Donavon Harris ’19, who is playing Caesar, a strict, no-qualms cop. He scolds the freshman for pretty much everything. Talking. Walking. Stalking. “Don’t look at me for approval!” says Babatunde, who looks massive and sounds melodious. “Don’t cut your eye at me like: ‘Am I doing okay, Coach?” 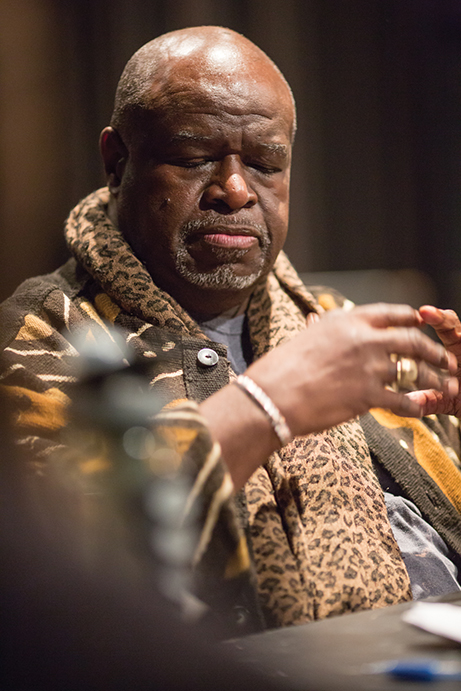 Babatunde eases the sting by praising Harris’ powerful presence. The director adds balm by pointing out that every actor, no matter how experienced or talented, gets dressed down in rehearsals at times. He recalls the time an English dialect coach savaged his Shakespeare. “She was out of her mind. But I’m a better actor because of her.”

Two days later, Harris is back in Babatunde boot camp, this time for a one-on-one tutorial. Two weeks into his third play ever, he insists that Babatunde is improving his life, academic and otherwise.

“I actually consider him one of my dearest coaches,” says the defensive back for Lehigh’s football team. “He might knock you down, but he’ll build you right up.”

Shepherding Harris was one of Babatunde’s roles as the first Theodore U. Horger ’61 Artist-in-Residence for the Performing and Visual Arts. A 40-year veteran of directing, acting and writing, the University of Texas at Dallas and Mountain View Community College teacher was recommended for the residency by a former protégé, Darius Omar Williams, assistant professor of theatre and Africana studies. Williams helped convince his colleagues to hire Babatunde by showing them a YouTube video of him teaching with his customary blend of bubbling passion, sly wisdom, ripe humor and lofty earthiness. In the classroom he alternates between favorite uncle, benevolent drill sergeant and very cool tribal chief.

Babatunde grew up in Brooklyn with the given name of Calvin Royall. The son of a policeman, Joe Royall was 13 when he decided to perform in public, inspired by a school production of the musical “Carousel.” His conviction was strengthened by a white teacher who told him he was too dark to be on stage. Fast forward several years and he was acting with the National Black Theatre.

Royall’s fate changed one day in an Africana shop in Harlem. The owner, a stranger, declared that he belonged to a Nigerian tribe. He changed his last name to Babatunde, which is Yoruba for “the father returns,” and his first name to Akin, which is pronounced “Ah-keen” and means “valor enters this house.”

For more than five decades Babatunde has developed a reputation as an accomplished actor, director, and writer whose theatrical career spans off-Broadway, regional theatre, film and television. He was a long term resident actor at Trinity Repertory Company, a renowned ensemble in Providence, R.I., and LaMama Experimental Theatre Club, a fabled Manhattan lab. His characters have ranged from Touchstone, the clever clown in Shakespeare’s “As You Like It,” to Troy Maxwell, the towering patriarch of August Wilson’s “Fences.” He’s directed everything from “The Piano Lesson,” one of Wilson’s 10 plays about African-Americans in Pittsburgh during the 20th century, to an all-black version of “Death of a Salesman.” He formed two theater companies Vivid Theatre Ensemble and Ebony Emeralds. He co-wrote with Alan Govenar and toured “Blind Lemon Blues” based on the pioneering country blues musician, and pioneering African-American Shakespeareans.

In the late ’70s Babatunde met one of his mentors. George Houston Bass (1938-1990) was a theater/African studies professor who served as secretary and literary assistant for Langston Hughes, the legendary playwright, novelist and jazz poet.

“I loved his spontaneity and the brilliance of his intellect,” says Babatunde of Bass. “He led me to find the significance of my feelings, to ask and delve and define.”

In the early ’90s Babatunde began teaching Bass’ lessons to a future Lehigh educator. Darius Omar Williams, then a student at Jackson State University, spent parts of three years assisting three Babatunde productions for a the Mississippi New Stage theater. “I always had a passion for theater. Akin ignited that passion,” says Williams, a performing playwright and poet. “He tells you to recognize your brilliance, own your brilliance, and never apologize for your brilliance. To not be consumed by fear, to put your worries in a box. To never internalize other people’s distorted perceptions of you. To just jump in and swim and play.

An Artist in Residence

Bringing Babatunde to Lehigh was Williams’ gift for his mentor. Babatunde repaid the gift by turning the class World Theatre: The Creative Spirit into a global experience. His students wrote responses to Romare Bearden collages while listening to blues tunes. They played people they studied during 10-minute breaks in the Zoellner Arts Center. They made a video of themselves flash mobbing across campus, dancing around and dunking a miniature basketball over unsuspecting and shocked pedestrians.

“I love how literal he makes everything, how he shows how theater can be applied tothe real world,” says the theater major. “He’s always saying: ‘If you’re not thinking, I don’t believe you.’”

Cast as Black Mary in “Gem of the Ocean,” Pettis shared Babatunde’s master class in intellectual, instinctual acting and directing. He watched a February rehearsal with a hawk’s intensity— head bobbing, eyes transfixed, mouth reciting lines. He edited the smallest actions—the placement of a hand on a cane, the movement of a quarter—as carefully as a chamber-music conductor. He was tough, reminding Donavon Harris to stop rocking “because it dissipates your strength.” He was loving, ending a long, draining stretch by cooing “Can I tell y’all how proud I am of y’all?”

“Gem” thrilled Williams, who played Solly Two Kings, a former Underground Railroad conductor and Union Army scout. He had a robust role in his first play directed by his mentor. Babatunde’s fine tuning helped make him, at age 41, “the actor I always wanted to be.” He saw his teen-age self in Harris, a student in Williams’ course Black Queer Performance. Empowered by Williams and Babatunde, Harris is thinking of changing his major from business to theater.

Babatunde is humbled by his protégés’ praise. “We don’t start off to be a mentor,” he says. “That’s a very arrogant thing to put on yourself. I just enjoy helping people blossom and grow. I’m always on a path of a sort of spiritual cleansing through my work.”

‹Previous
Public Facing
Next ›
A Passion for Politics