Not long after Richard Nixon’s historic 1972 trip to China, Michael Macaluso ’83 landed in Beijing. Looking back on that trip to Asia, he says it’s difficult to pinpoint the moment that marked the beginning of the rise of China. If there was one, perhaps it was the “great opening” of Deng Xiaoping, or, he says, perhaps Nixon’s visit acted as a catalyst. By the time Macaluso arrived, he saw signs of Chinese entrepreneurship everywhere.

“Excitement could literally be felt in the streets, foreshadowing what was to come,” he recalls. 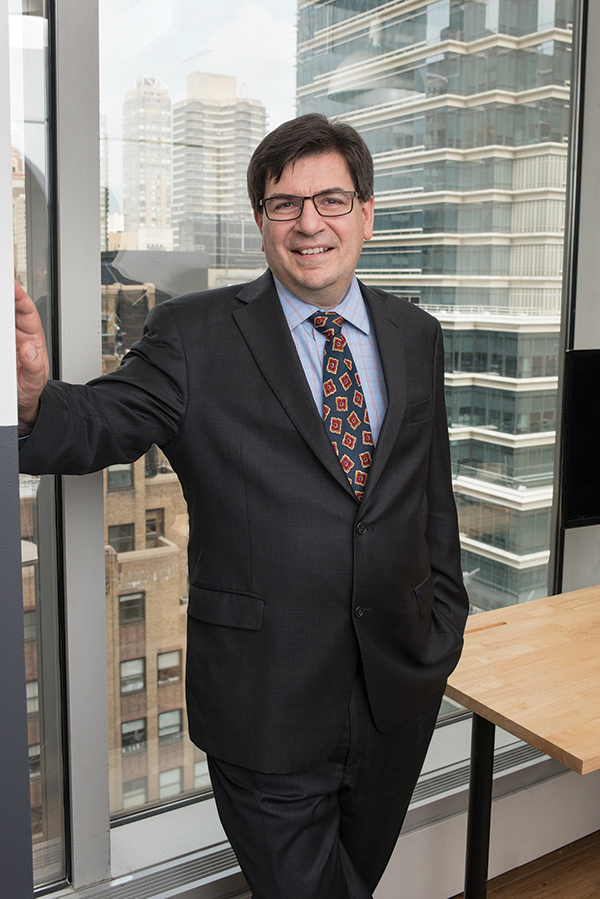 Over coffee at NYC’s historic Algonquin Hotel, as a group of Mandarin-speaking tourists chat nearby, Macaluso talks about how today he’s pinning a big part of his company’s fortunes on the world’s most populous nation. Macaluso is chairman and CEO of Global Access CSG, a global private-equity, merchant banking and advisory services firm. The firm, which he founded four years ago, targets promising growth companies in health care and agricultural technology and particularly those with a strong double bottom line—the potential to provide a financial and a societal return.

Somewhere near half of his company’s business is in Asia, with a large proportion of that in China. In the past year alone, he’s visited the country just under a dozen times to meet with entrepreneurs, technologists and other portfolio partners.

“The rise of China, and indeed Asia more generally, is this century’s major story,” he observes.

Before starting Global Access CSG, Macaluso, who majored in philosophy and went on to receive JD and MBA degrees, spent nearly three decades managing global cross-border transactions, investments and ventures for law firms such as DLA Piper and Morgan, Lewis & Bockius. During the 2007 financial crisis, he led restructuring efforts for major financial institutions in the United States and Europe and worked closely with central bankers and regulatory officials. With a portfolio of global restructuring and corporate finance efforts, and calling cards of government officials and business leaders, Macaluso then turned  his legal practice to helping fast=growing companies in the United States, China and other world markets. He assessed industries and looked at business models that suited a rapidly changing global economy—and those that didn’t stand a chance.

Four years ago, he decided to turn that experience into Global Access CSG to focus on taking stakes in promising companies or buying them outright. Health care proved a target because of its financial and societal promise. He sees promise in the disruption brought about by virtually unprecedented transformation of the entire sector as technology and biology converge, Macaluso explains.

“If we improve medical outcomes, people are better off and lead healthier lives. That’s rewarding and humbling,” he says.

What’s more, the field attracts inventors, who are not necessarily entrepreneurs. Macaluso believes medicine is rich in luminaries who develop compelling ideas but don’t necessarily have the interest or the knowhow to go from compelling idea to commercial product. Heart disease provides illustration. More than 17 million people around the world die every year from cardiovascular diseases, according to the World Health Organization, which ranks it the No. 1 killer worldwide. Macaluso says so many people die from the disease because they don’t find out they have it until they’re in an advanced stage.

When Macaluso learned about a device that could assess someone’s risk for heart disease in 20 minutes without piercing the skin, he acted fast. Global Access CSG conducted research on the inventor, the device and the market potential. It took a stake in the company and is now its largest outside investor. Global Access CSG is working on plans to roll out the device in Hong Kong and Indonesia and follow in other Asian nations.

Meanwhile, Macaluso is also trying to figure out how to use technology to solve a problem that has troubled China for thousands of years. Echoing a recent article in National Geographic, How China Plans to Feed 1.4 Billion Growing Appetites, Macaluso points out that the country has one-sixth of all people in the world and less than 10 percent of the world’s farmland.

This is not just a problem for China, of course. Food security is a global concern as world population is expected to rise to more than 9 billion by 2050, according to a forecast by the United Nations. Macaluso is certain that innovation will provide solutions to world hunger problems, and that’s why he’s so interested in agricultural technology.

He believes Lehigh students can lend a hand. Reflecting a New York Times Magazine report titled How to Get a Job with a Philosophy Degree, Macaluso says if universities want to preserve the liberal arts, they have to do a better job helping students with majors like anthropology, psychology and philosophy to figure out how to convert their studies into the work world.

“Almost nothing has changed since I graduated,” he says. “Liberal arts students are still trying to figure out what to do with their degrees.”

Macaluso is determined to make a change by preparing a select group of students to enter the workforce. He started an internship program especially for students from Lehigh’s College of Arts and Sciences.

“Smart, with all of this experience before they even get to college, we see them as perfectly suited to the kinds of cross-boundary thinking the world needs and demands now,” he points out.

“We would not have gotten this program off to such a promising start without the deep support provided by Dean Hall and his staff,” Macaluso says.

His team made it possible to present to large groups of students to talk about what the internship offered and facilitated follow-up.

The next summer, he signed up three students to work out of Global Access CSG’s Minneapolis headquarters. Ryan Grace ’18, who studied international relations and economics, joined the first group of interns. Early on, he was paired with the chief technology officer and began researching artificial intelligence for an invester presentation. He accompanied the CTO to the invester meeting and spoke about AI .

“I was surprised and grateful that they took me so seriously,” Grace said.

Grace also researched the technology behind currencies and wrote a biomedical market report.

“ I could walk in any given day and have a brand-new assignment and learn how we could make money out of it,” he said.

This summer’s students have the option of working out of different offices—Minneapolis, New York City or Hong Kong. Macaluso is now looking at ways to turn the summer internship into a year-round program.

“We have the kind of ‘brain work’ that a college student team could really sink their teeth into,” he says. ‹Previous
Marching On
Next ›
Navigating the College Experience